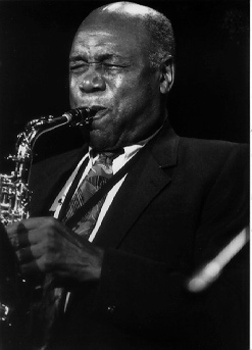 slideshow
Buddy Collette is famous for a bunch of things: The reed and woodwind player helped develop West Coast chamber jazz in the mid-1950s. He was one of first black musicians to work steadily in the Los Angeles studios and the first to perform on television. Buddy recorded playing upward of 10 instruments and appeared on more than 325 recording sessions. He also was one of the earliest jazz flutists and jazz-flute arrangers. [Photo of Buddy Collette in 1956 by Gordon Parks for Life]

And then there's his contribution to integration. In 1953, Buddy helped amalgamate the American Federation of Musicians' white and black locals in Los Angeles.

Back then, two different union locals operated in many major cities--one for white musicians and one for blacks. Buddy not only brought the two locals together in L.A., but he also went on to have a sterling recording career, which is a testament to his sunny personality and extraordinary musical skills.

In Part 1 of my five-part interview with Buddy, 88, the saxophonist, flutist and clarinetist talks about growing up in Los Angeles, his father's charm, his grandmother's passion for music, forming a band at age 12, and hiring a pre-teen Charles Mingus.

JazzWax: Where did you grow up in Los Angeles?

In the Watts area. There were a lot of good black musicians out there in the 1930s, many from prestigious musical families. Lester Young's family lived in the area. So did Britt Woodman's. [Los Angeles in the 1930s]

JW: How many students in the class?
BC: Quite a few but only girls. I was the only boy. Girls were kind of silly at the time. Each person had to play in front of everyone, which was hard to do for me with girls watching [laughs].

JW: What did your dad do for a living?
BC: My dad drove a city garbage truck. He was so proud of his job and was very well liked. When he pulled up and waved, people would come out of their homes and give him fruit and pies to take home. Not that he was hungry. He just had a great personality, worked hard and charmed everyone he met.

JW: Did you father like music?
BC: Very much. When I was 15 years old in the late 1930s, he took me to see Louis Armstrong at the Elks Hall Club on Central Avenue. When Louis played, I was hit with the biggest thing I ever saw. Louis was in top shape at the time. He'd play, and toward the end of each song, people in the audience would scream, “Higher, higher." He'd make a face like the note he had just hit was as high as he could go. But then he'd put his horn to his lips and find higher notes. I realized then that I wanted to be a musician, to improvise and play all those solos.

JW: Did your dad encourage you?
BC: He didn't openly encourage me to be a musician, but he supported what I wanted to do. As I was coming up, my dad always asked if I was making enough money. When I told him early on that I was making $35 a week as a musician, he said, “Wow, that's more than I make."

JW: Did he ever hear you play live?
BC: Most of my work was for records and movies. But five years before he passed away, I played the flute on the radio in Los Angeles. This was around 1980. My dad said, “Wow, you sounded just like a little bird on that instrument."

JW: How did you come to the saxophone?
BC: When I was in junior high school I picked up the sax and clarinet. They came fast and easy to me, but I knew that switching from piano to these instruments was going to cause a fuss at home.

JW: Why?
BC: My grandmother had wanted me to become a famous concert pianist and travel all over the world. I was close with my grandmother. She was respected in our home. When she said something, my family responded to her wishes right away. She was also generous. Each year she had a Christmas dinner at her house. Her birthday was on Christmas Eve, but she never officially celebrated it because she was so busy cooking and getting everything ready. When I asked her why we didn't celebrate it, she said, “It's Christmas." Everyone was always in such a rush to have turkey they forgot about her day. But she didn't mind. My grandmother was very much about making everyone else happy. Except when it came to music [laughs].

JW: How did you get the sax home?
BC: My brother had a sax but wouldn't practice it. His lack of interest might have come from having a bad teacher or some other reason. So I took my brother's sax, which was hidden under his bed. I finally got up the courage to tell my grandmother about my wish to switch from the piano to the sax.

JW: What did she say?
BC: She was devastated. She said, “I thought eventually I would hear this from you. All of my kids quit the piano." I felt bad and promised I'd work hard on the sax, but she still fell out with me. We didn't talk for a while.

JW: Which instrument did you study first?
BC: I took up the clarinet. William Woodman Jr. gave me my first lesson. His brother was trombonist Britt Woodman [pictured], and their dad William Sr. was a trombone player who had played with Duke Ellington early on. Mr. Woodman once told Duke that he was going to teach all his kids to be top musicians. And that's exactly what he did.

JW: How did Britt Woodman sound when he was a kid?
BC: Britt was playing all the trombone you needed to hear by age 13. Mr. Woodman was so confident in Britt that he told Duke [Ellington], “I'm going to prepare my son to be in your band." Well, 25 years later, Britt Woodman was in Duke's band.

JW: Were you a fast learner?
BC: Very much so. By the time I was 12 years old, I was leading a local band. At around that age, my friends told me about a guy our age named Charles Mingus. They said, “He's heavyset and plays the cello," which sounded odd to me. We soon met--by accident. I was walking down the street one day and here comes this guy my age who's heavyset with bowed legs and is carrying a shoeshine box. But the box was strange. It looked like a chicken coop with tall legs on it and a little door.

JW: Did you stop him?
BC: I did. I said, “Are you a shoeshiner? I am, too. You don't need a box that tall." The kid said, “I like my guys to sit on a car fender so I don't have to carry a chair around with me. The box has long legs so their feet can reach." Finally he said, “I'm Charles Mingus, I play the cello." I said to him, “If you can get your dad to trade in the cello for the bass, you can be in my band."

JW: Did he?
BC: I didn't see him for a week or two. When I did, Charles came up to me and said, “Guess what? My dad got me a bass for the cello." Charles joined my band, which also included Britt.

Tomorrow: Buddy Collette talks about his Navy years, studying formally after World War II under the G.I. Bill, turning down Duke Ellington's offer to join his band, and listening to Gerry Mulligan and Chet Baker figure out their new sound at his apartment in 1952.

JazzWax tracks: Buddy Collette's earliest recordings feature him in 1946 in Los Angeles playing the baritone sax behind singer Ivie Anderson with Charles Mingus on bass. You'll find I Got It Bad, Sunny Side of the Street, I Thought You Ought to Know and Voot Is Here to Stay on an Ivie Anderson CD here.

Buddy Collette, Charles Mingus and Britt Woodman were all together in 1946 on a session led by Mingus. You'll find the tracks--Make Believe, Honey Take a Chance With Me, Bedspread, This Subdues My Passion, Pipe Dream, Mingus Fingers and These Foolish Things--on Charles “Baron" Mingus: West Coast 1945-49 (Uptown) as a CD or download here.

JazzWax clip: Here's a perfect introduction to Buddy's sound on the alto sax. In this clip, Buddy is playing unaccompanied in museum space some years back. Dig the polished purity of his intonation and fluidity of his improvised ideas...