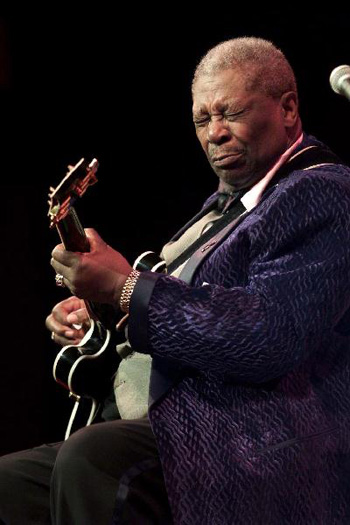 slideshow
Proud of your vast CD collection? Think your iTunes library is bursting with great stuff? Trust me, B.B. King has you beat. Two weeks ago, when I was in Missouri to interview the 85-year-old blues legend while he was touring on the road, I spent time with “the Boss" in the back of his cozy bus. My interview appears in today's Wall Street Journal (go here). Like a kid eager to show off a cool toy, B.B. was only too happy to walk me through his stereo system and his large digital collection.

Actually, “stereo system" is probably an antiquated term for the rig B.B. has installed back there. Technically, it's a Kaleidoscope home-theater system that stores thousands of digital music and moviefiles. To display the system's library, B.B. touches a small screen that functions as a remote. This displays all of the albums and DVDs loaded into the system on a large flat screen. They come up first as covers. Then B.B. moves a white frame around on the big screen to the album he wants to hear and touches the small screen again to call up the tracks.

If you know enough about B.B.'s background, all of this makes perfect sense. B.B. started out as a guitar-playing, record-spinning disc jockey at WDIA in Memphis back in 1949. “I think you're right," he said. “My passion for music&#151all kinds—started back on that radio show."

Sitting on a leather banquette in B.B.'s tour bus almost knee to knee with the King of the Blues, I couldn't help but sense that the guitarist was a little shy. It wasn't the meek kind of shy but the shy that comes when you spend large amounts of time alone and suddenly your space is invaded.