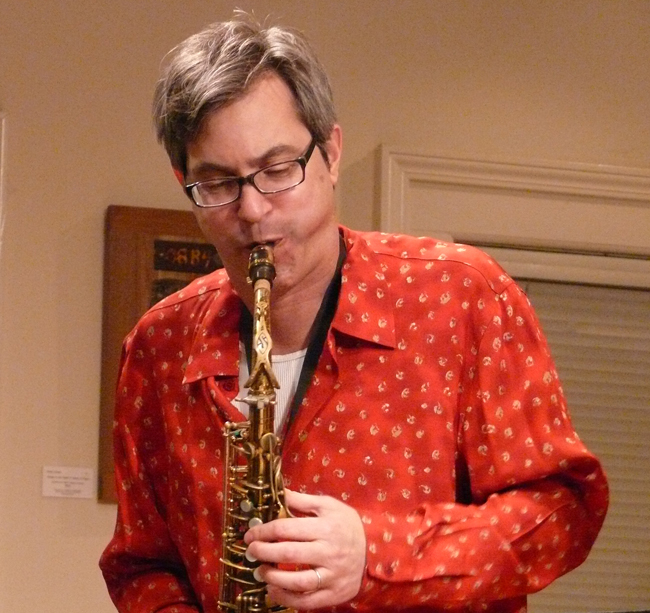 slideshow
Clarinetist, saxophonist, and composer Andy Laster has been involved in New York City’s jazz scene since the mid-1980s, when he relocated upon completing studies at Seattle’s Cornish Institute. Since then he has worked with musicians such as Julius Hemphill, Hank Roberts, Cuong Vu, and Erik Friedlander. In preparation for this week’s performance by his Sounds of Cairo ensemble – featuring Curtis Hasselbring on trombone, Alex Waterman on cello, and Kermit Driscoll on bass – Ars Nova Workshop asked Laster a few questions about this exciting project.

Who are some of the composers whose work Sounds Of Cairo perform, and what about their work and the larger cultural world of the time motivate the project?

Most of the pieces are by Dawud Husni and Zaki Murad, transcribed from recordings from the 1920s. French record labels such as Zonophone and Odeon did a booming business in Egypt, even prior to World War I. Egypt led the Arab world in recording technology and much of Cairo’s middle class owned gramophones, making these early twentieth century recordings commercially viable. I was drawn to Husni’s and Murad’s music because of its intense, bluesy tang and to the light sound and feel of their ensembles. Husni and Murad were part of Cairo’s vibrant Karaite Jewish community, which thrived until the 1960s. Karaite Judaism is a sect that accepts Torah but not Talmud or Mishnah. As a Jew, this aspect further piqued my interest.

How did you select the instrumentation for the ensemble and in what ways does it differ from how these songs were traditionally performed?

The instrumentation of my ensemble is very different from that of a traditional ensemble, which included a few singers, a zither, fiddle, and sometimes a flute. My ensemble includes trombone, cello, bass and clarinet/saxophone. I chose trombone because of its vocal quality, cello because of its warmth and ability to sound full and natural pizzicato or bowed, and bass because it provides the forward propulsion especially necessary in a drummerless ensemble.

How faithful to the original compositions are your arrangements?

The original songs are in the Dawr style of chant alternating with refrain. These were secular songs, performed in men's clubs. The lyrics were often risqué. I am purposefully unfaithful to the original compositions, having added contrasting sections and composed structures that are more suited for today's improvisers. The biggest area in which I was not faithful is regarding the use of the maqām. Arabic music uses different modes and scales than Western European music and I believe it is nearly impossible to successfully intone these modes unless one has grown up in an Arabic musical environment. I do believe, however, that it is possible to capture the feel and spirit of these original recordings without playing themaqām, plus add something original, modern, and improvisatory along the way.

Andy Laster’s Sounds of Cairo will perform a free concert on Thursday, October 21 at The Rotunda (4014 Walnut Street).