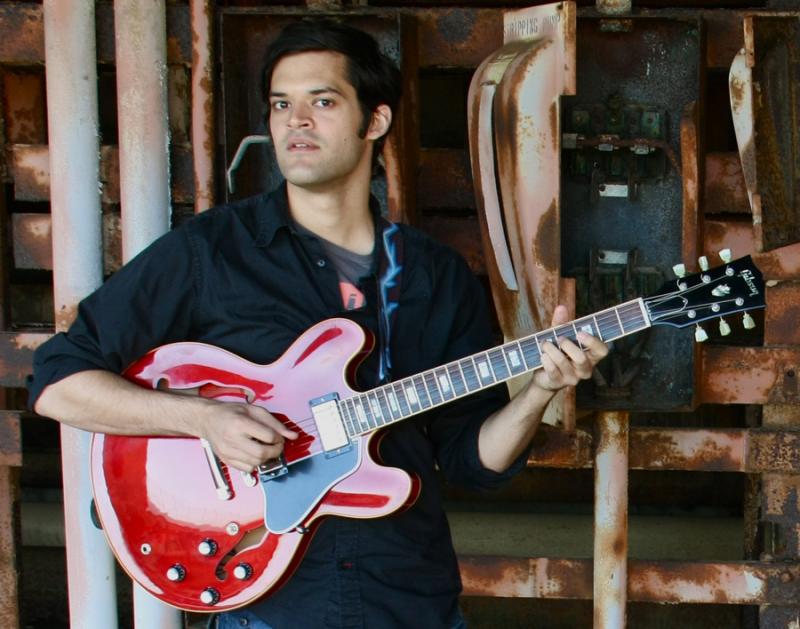 slideshow
San Francisco-based jazz guitarist Alex Pinto has a sound and concept unlike any other player on the scene. On his debut CD, Inner State, which features his working quartet, Pinto makes a powerful first impression with his fluid phrasing, bright tone, and a program of seven original compositions marked by engaging melodies and unorthodox harmonic forms.

“What I like about Alex is that he is a true artist," says Jaz Sawyer, whose Pursuance Records will release Inner State on March 22. “He puts so much time, effort, and concentration into the music. He plans for longevity in the arts. I share that focus."

Sawyer plays on the CD, as do tenor saxophonist Jon Armstrong and bassist Dave Tranchina, colleagues of Alex's from their days at CalArts (where he earned his MFA).

The son of an Indian father who works for the World Bank and an American mother from Wisconsin who is a professor of anthropology, Alex Pinto was born in the Washington, DC area in 1985 and lived in Poland and Russia for years at a stretch when his dad was posted there. (He began playing guitar at five while living in Warsaw.)

“Wes Montgomery and Jimi Hendrix were my initial guitar heroes," Pinto says. “I got enamored with John Coltrane, and I still listen to recordings that span his career. And Hindustani music has been huge for me, masters like Ali Akbar Khan and Nikhil Banerjee, who makes me feel the same as Hendrix and Coltrane."

After completing undergraduate studies at McGill University in Montreal, and frequent visits to his father's family in Karnataka in southwestern India, Pinto reached a career epiphany in 2006 while attending Dave Douglas's Banff Creative Music Workshop, where he forged ties with heavyweight improvisers like Rez Abassi and Donny McCaslin. “Rez gave me the courage and inspiration to pursue my path on the guitar," says Pinto. “He always stressed creating genuine ideas and owning concepts, something very evident in his playing and composing."

“Alex is one of the very few players of his generation to seriously take on the challenge of creating a hybrid music, namely one of Jazz and Hindustani music," says guitarist Rez Abassi. “He's grown both as a player and conceptualist considerably since our first meeting five years ago. I can only imagine the music he'll produce in the years to come."

The guitarist arrived in San Francisco in 2009 as part of the inaugural class of MusicianCorps Fellows for Music National Service, and spent a year serving as the music coordinator at Horace Mann Middle School. He has been making his voice heard on the vibrant Bay Area music scene, and is poised to introduce his music to a wider audience with the release of Inner State.

The quartet will be performing 3/26 at the Revolution Cafe in San Francisco (where Pinto frequently works) and 4/9 at the Blue Whale in Los Angeles.

In addition, Alex will appear with bassist Doug Stuart and drummer Shaun Lowecki 3/31 at the Lost Leaf in Phoenix; 4/2 at the Chandler (AZ) Jazz Festival; and 4/3 at the Highland Jazz Festival in Gilbert, AZ, where the trio will also conduct a clinic.

Northwest and East Coast dates are in the works, with a two-night stand at Twins Jazz in Washington, DC confirmed for 5/6-7. Pinto will perform with Jaz Sawyer, bassist Tom Baldwin, and saxophonist Paul Carr, in whose bands Pinto often played when living in the DC area.