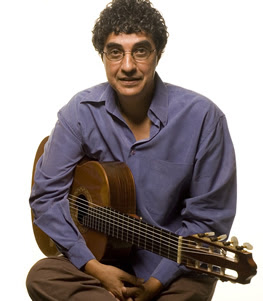 In celebration of America’s 50-year love affair with Brazilian jazz, five venerated jazz artists will teach and perform Samba music in the first inDepth Jazz Clinic and Concert of the season. The eight-year-old series near the nation’s capital serves gifted amateur and semi- pro musicians and jazz lovers with half a dozen programs annually.

Last season’s Brazilian workshop was the most successful in the history of the series; many musicians and fans had to be turned away. This year’s super-charged workshop features two brilliant Brazilian musicians: guitarist Rogério Souza (on a brief American tour) and virtuoso bassist Leonardo Lucini. They will lead an inspired journey into Samba, Samba Choro and Bossa Nova. As the world turns to Brazil for the coming World Cup and Olympics, interest in this beautiful and complex music will only increase. This event will allow music lovers to delve into an authentic version of the popular sound.

Rogerio Souza is an award-winning traditional Brazilian guitarist, composer, arranger and teacher. He has recorded with other top Brazilian artists such as Baden Powell, Sivuca, and the Choro-group Época De Ouro. He has performed at prestigious venues around the world, including the Festival Villa Lobos in Brazil, the International Jazz Festival in Denmark, the Stadgarden Festival in Germany.

Leonardo Lucini is a bassist, composer and educator. He has performed abroad with top artists Nestor Torres, Arturo O’Farrill, Alex Acuna, Leo Gandelman, Raul Mascarenhas, Federico Pena, and Gregoire Maret. In the U.S. he leads the Brazilian jazz band, Origem. In Brazil, he has performed with well-known groups such as Nó Em Pingo D'Agua and with saxophonist Paulo Moura. He has given lectures and clinics at Goucher College, George Washington University, George Mason University, University of Maryland and Berklee College of Music. An Artist in Residence at Montgomery College, he lectures on Brazilian music and directs the Latin Ensemble.

Percussionist Harold F. Summey, Jr. has had an impressive career as a classical and jazz artist. In 1992 he won first prize in the Thelonious Monk International Jazz Competition. He has worked with icons Ray Charles, Sonny Rollins and Wynton Marsalis and performed with the Smithsonian Jazz Masterworks Orchestra and Kennedy Center Opera Orchestra. He is on the adjunct jazz faculty of George Mason and Howard Universities.

Pianist Wayne Wilentz has played Brazilian jazz in the Washington area since 1989. He has accompanied such mainstay DC vocalists as Pam Bricker, Nicki Gonzalez and Patrick DeSantos. He is also the vocal coach and accompanist for the DC Jazz Vocalists Network. He has performed with R&B acts such as The Coasters, The Shirelles and The Marvellettes. A former funk player, he earned a gold record for Skyy Line on Salsoul Records.

Saxophonist Jeff Antoniuk is an internationally respected jazz composer and musician. Critics around the world lauded his 2010 CD, Brotherhood and his earlier album, Here Today. He has toured extensively and shared the stage with U.S. hit makers Ray Charles, Natalie Cole, Freddie Hubbard, Najee and Marcus Miller. He also has performed with many fellow Canadian jazz greats. Antoniuk has helped hundreds of aspiring jazz artists improve their techniques and launch music careers through his in-Depth Jazz clinics and annual Maryland Summer Jazz camps.

These artist educators are uniquely qualified to teach the Brazilian Samba workshop and play in the related concerts. For more information and registration call Jeff Antoniuk at 410-295- 6691 or visit www.indepthjazz.com

Concert Fans of Brazilian Jazz can get in on the action on Friday and Saturday, September 21 and 22 at Twins Jazz club located at 1344 U Street NW in Washington, D.C. The concert features the same stellar artists from the workshop. Shows are at 9:00 p.m. and 11:00 p.m. each night. Tickets are $20 and can be purchased at www.twinsjazz.com. For information, call 202-234- 0072.

The 2012-2013 Season of inDepth Jazz Clinics & Concerts covers everything from samba to Monk and modern jazz. Vocalists and instrumentalists may attend these afternoon workshops and jazz patrons are invited to the public concerts.