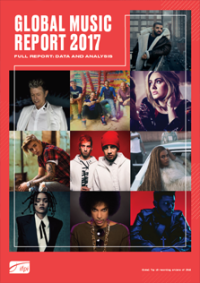 International trade group, the IFPI, released its annual Global Music Report 2017 today. It's overview of developments in the recorded music sector including the rise in streaming and the industry’s priorities. Analyst Mark Mulligan offers a quick look at the numbers.

By Mark Mulligan of MIDiA and The Music Industry Blog

Today the IFPI published their annual assessment of the global recorded music business. The key theme is the first serious year of growth since Napster kicked off a decade and a half of decline, with streaming doing all the revenue heavy lifting.

The findings won’t come as much of a surprise to regular readers of this blog, as at MIDiA we had already conducted our own market sizing earlier in the year. The IFPI reported just under a billion dollars of revenue growth in 2016 (we peg growth at $1.1 billion) with streaming driving all the growth (60% growth, we estimate 57%). IFPI also reported 112 million paying subscribers (our number is 106.3 million, but the IFPI numbers probably include the Tencent 10 million number as reported, while the actual number is closer to 5 million).

IFPI report physical sales declining by 8% (we have 7%) and downloads down by 21% which is 3 percentage points more decline than the majors reported; this implies the IFPI estimates the indies to have had a much more pronounced decline than the majors. MIDiA is currently working with WIN to create the 2017 update to the global indie market sizing study, so we’ll be able to confirm that trend one way or another in a couple of months’ time.

Overall, the IFPI numbers tell the same good news story we revealed back in February, namely that streaming is finally driving the format replacement cycle that the recorded music business has not had since the heyday of the CD. Without streaming, the recorded music market would have declined in 2016. Streaming is driving revenue growth by both growing the base of users and, crucially, increasing the spend of more casual music spenders, changing them from lower spending download buyers into monthly 9.99 customers.

“Spotify’s success story has expanded beyond established markets, with Brazil and Mexico now making up two of our top four countries worldwide by reach. Back when the industry peaked in 2000, Brazil and Mexico were 7th and 8th biggest markets in the world respectively. A combination of increasing smartphone adoption [reaching far more users than CDs ever did] and Spotify’s success makes the potential for these emerging markets to ‘re-emerge’ and to exceed previous peaks.”

One surprising point is that the IFPI reported a total of $4.5 billion for streaming ($3.9 for freemium and $0.6 billion for YouTube, etc.). However, the major labels alone reported revenues of $3.9 billion (see my previous post for more detail on label revenues). That would give the majors an implied market share of 87% in streaming. Which seems like a big share even accounting for majors including the reveue of the indie labels they distribute in their revenue numbers (eg Orchard distributed indie label revenue appearing in Sony’s numbers). Last year the IFPI appeared to have put Pandora revenues into US performance revenues rather than treat them as ad supported streaming, so that could account for an extra $400 million or so.

Revenue From Paid vs. Freemium

Nonetheless, taking the IFPI’s $3.9 billion freemium revenue and the 112 million subs number both at face value for a moment, that would equate to an average monthly label income of $2.90 per subscriber or a combined average monthly income of $1.53 for total freemium users (including free). These numbers are skewed in that they are year end numbers (mid year user numbers would be lower, so ARPU would be higher) but they are still directionally instructive ie there is a big gap between headline 9.99 pricing and what label revenue is actually generated due to factors such as $1 for 3 month trials and telco bundles.