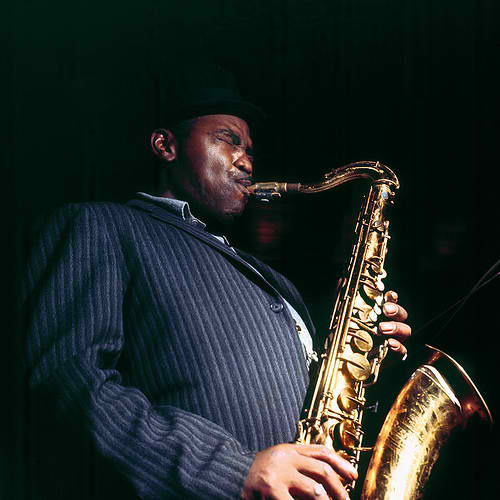 slideshow
Saxophonist Ike Quebec, born August 17, 1918, was one of my favorite soul-jazz artists on Blue Note Records in the early 1960s. He had a full-throated sound (in the Coleman Hawkins vein), a sensuous and firm tone, rhythmically dynamic, and swinging. Quebec can be heard on breathy ballads, quiet bossa nova tunes, and more aggressive blues.

He was born in Newark, New Jersey, and trained as a pianist and dancer, not switching to the tenor sax until his twenties. Early in his career in the 1940s, he earned his chops with a number of well-known bands and performers, including Roy Eldridge, Benny Carter, Coleman Hawkins, Cab Calloway, and Ella Fitzgerald. He was also a sort of unofficial talent scout for Blue Note, helping to advance the careers of Thelonious Monk and Bud Powell.

He struggled with drug addiction throughout the 1950s and recorded infrequently. However, later in the decade he started a comeback with Blue Note. He recorded a number of singles for the burgeoning jukebox market; a number of jazz labels were beginning to take note of the jukebox at this time, including Columbia with Miles Davis's Kind of Blue. Blue Note later released these Quebec sides as a two-CD set, The Complete Blue Note 45 Sessions.

In 1961 and 1962, he recorded some terrific albums, including It Might As Well Be Spring (1961), a collection of quiet ballads. Blue and Sentimental (1961) is probably Ike's masterpiece. He and Grant Green on guitar really stretch out on this collection of originals and standards, with some wonderful bluesy soloing. The title tune and Green's “Blues for Charlie" are standouts. My personal favorite is Soul Samba (1962), recorded shortly before Quebec succumbed to lung cancer in January 1963. Here, he is joined by Kenny Burrell for a program of sultry, Brazilian-tinged tunes. His playing sounds as if it is coming from somewhere deep inside—just listen to his original tune “Blue Samba“—Ike playing beautifully until the very end.

This story appears courtesy of Riffs on Jazz by John Anderson.
Copyright © 2021. All rights reserved.