SOURCE: ALL ABOUT JAZZ PUBLICITY
July 6, 2009
Sign in to view read count 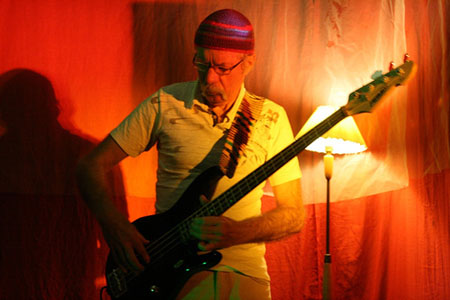 slideshow
Hugh Hopper departed this world on June 7, 2009, victim of leukemia, as, curiously, his previous collaborator, keyboardist Alan Gowen had, almost three decades ago. Hopper was, on his own, a revolutionary bassist and composer who found early exposure in the 1960s but never gained the exposure he really deserved during his lifetime. He still, however, managed to put out an impressive body of work.

Hopper started on guitar and Alto saxophone (brother Brian played tenor saxophone) and he started playing with friends in the Canterbury area in England (many musicians associated with the Canterbury" school actually dislike that nomenclature, as many of them did not come from Canterbury or even live there). But Hopper was a native. He wound up hanging out with Robert Wyatt--who had moved to the area--and his older brother Brian had been friend s with and jammed with older student Michael Ratledge on Hindemith piano sonatas when they were younger). Eventually, he and Wyatt joined a young group called the Wilde Flowers, the urgroup from which both Soft Machine and Caravan evolved.

Robert Wyatt and Kevin Ayers went off with the older Daevyd Allen and Mike Ratledge to form the original Soft Machine. After Allen was forbidden from re-entering the UK after a French tour, Ayers, Ratledge and Wyatt continued as a trio (although they occasionally added guitarists--the unknown Larry Nolan for a short while and the later Police guitarist, Andy Summers for a time) In a relatively well-known series of events, Soft Machine, by dint of their sharing a manager with Jimi Hendrix, supported Jimi Hendrix during one of Hendrix first U.S. tours (also included on the tour were Irish band Eire Apparent). Hopper was hired as road manager during this tour and, among other things, was responsible for keeping the rather well-worn Soft Machine equipment going and making sure Mike Ratledge was well-equipped with fuzz tones. He was also a co-writer of the opening track on their first album (Hope for Happiness) and was sole writer for the concluding track on the album, the quirky, Box 25/4 lid an unusual composition for piano and (in an prescient moment perhaps, although Hopper was not the player) fuzz bass. The choice of notes for the composition was done by tossing dice.

The U.S. tour was such a drain that the band was on the brink of breaking up, but were convinced by the record company to tour to support the first album, but Ayers had already left. Ratledge and Wyatt asked Hopper to substitute on bass for Ayers. It was a direction-changing decision. The band promoted the first album and were brought together to prepare a second record for ABE Probe, Soft Machine Volume 2. (Like Van der Graaf Generator, Soft Machines first efforts were only, curiously enough, available as U.S. imports!)

With Hopper on board, Wyatt and Ratledge had a bassist who was technically far more competent than Ayers, and also who was as interested in jazz as Wyatt and he were. He also had a bass player more used to the conventional role that a bass had of laying a foundation and who could swing like a jazz player (this can be heard most clearly on pieces like Slightly All the Time on Soft Machine Third, in which Hopper does a fascinating emulation of Jimmy Garrisons work with John Coltrane, but on an electric bass, and on Kings and Queens on Soft Machine Fourth, but it also shows in an aggressive style. Hugh was also a fine songwriter, as proved by the sadly beautiful ballad, “Memories", interpreted by artists as diverse as Robert Wyatt and Whitney Houston.

Hopper was also involved as far back as 1963-1964 with Daevyd Allens Terry Riley-influenced tape experiments, which were to inform his vision as a composer and musician. (One wit joked that this work was being done before the Beatles had even recorded Love Me Do!).

When Soft Machine Volume 2 came out, the group was tight, professional sounding and the sound had changed radically into tight compositions, expertly played. The change in sound from the first Soft Machine album was quite obvious. Volume 2 is really an abbreviated version, compressed into short songs, of what was to follow with Third. The big and most pronounced difference was Hopper.

Also, the band made use of Hoppers instrumental diversity on this album, as well as his compositional acumen. Hopper plays electric bass (with fuzz--added at Mike Ratledge's urging because he wanted another solo instrumental voice in the band), acoustic 12-string (which paired with Mike Ratledge's harpsichord, on “Dedicated to You But You Weren't Listening," seems like a precursor to Genesis short acoustic pieces that show up later), and alto saxophone (Brother Brian Hopper and he are a precursor to the full wind section that show up on Soft Machine Third.).

At just about 33 minutes, it does not seem like Volume 2 would be such a grand statement, but it was a ridiculous album, unlike anything else recorded at the time. It was a synthesis of jazz, rock and contemporary classical that was uniquely melded together, not juxtaposed--and Hopper was the writer for fully half the album. Hopper fully conceded he was influenced by Zappa and Coleman in his compositional approach but his work did not transparently show those influences. His long melodic lines (seen in their full flower on Facelift on Third were, he fully admitted, the result of having very few restrictions on his writing and being in a very tolerant musical environment.

And that fuzz bass--certainly other musicians before Hopper had used fuzz bass--McCartney, Wyman, the Count Five (Psychotic Reaction), the Music Machine and many others had used this little technological application, but Hopper liberated it to an unusual degree-first heard on Volume 2. The fuzz seems to be turned up to eleven, and it does allow Hopper a chance to challenge Ratledge's instrumental dominance, sometimes becoming the lead instrument. Given that Entwistle was one of Hoppers initial influences (along with James Jamerson from James Browns band), it is perhaps not surprising that Hopper was up to the task--but the experience of a bass player being an equal in a band was fairly unique, even though the Who and Cream had set precedents in this area. Not that many bass players were up to the technical demands back then.

Third with its suite-like side long compositions gave Hopper ample opportunity to stretch out (he had one whole side to himself with the split location live recording of Facelift, a piece of music that was known to clear entire dorm rooms, but also fascinated people with its blend of freedom and composition. He also contributed outstanding instrumental work to Ratledge's two pieces and to the instrumental rave-up that ends Moon in June, in which one can hear the instrumental damage a full flight fuzz bass can do.

On Fourth, Hopper actually contributed more than half of the albums compositions, with side 2 being solely his with the tape-based composition Virtually, and perhaps his prettiest composition (apart from the ballad “Memories"), Kings and Queens.

While Hopper continued with Soft Machine for two more albums, his contributions fell a bit after Fourth, and although he was an integral part of the group, the change, first to powerhouse drummer Phil Howard, then to Karl Jenkins joining the band and changing the groups sound, eventually lead to him leaving the band. He was still in high demand after he left Soft Machine, putting out his solo album 1984, an ahead of its time electronic compositional work, and joining Stomu Yamashta's East Wind, contributing great work for this band, and later joining Isotope, a Mahavishnu-esque Jazz-Rock group that benefitted from his unique perspective. He was also a guest on Robert Wyatt's landmark Rock Bottom, making wonderful contribution to three songs on the album.

Hopper Tunity Box with Dave Stewart, Gary Windo and others, was a masterful solo record, which showcased Hoppers instrumental abilities and tape techniques. He also engaged in fascinating group endeavors in the late 1970s and early 1980s such as Alan Gowen's Two Rainbows Daily.

Into the 1980s, career options started to fall back a bit for Hopper, and, for a time (as did Daevyd Allen) he found himself driving cabs for a while, and not engaging in music. In the mid to late 1980s more opportunities started to provide themselves to Hopper again, and he maintained a very active musical life in groups with people like Elton Dean, Phil Miller and others. He also managed to out together quite a few solo and duo projects with different musicians and singers, including projects connected with Soft Machine (Soft Heap and some Soft Machine Legacy combinations), projects with the engineer Kramer.

Active until he became very ill, one of his most recent projects was a free improvisational session with Charles Hayward and two other musicians called Numero DVol on Moonjune records. He was very active with Hux records and his own projects. A pioneer and explorer, until the end, but mostly just a magnificent and innovative musician, Hugh Hopper will be sorely missed, but he left a massive body of work behind a unique and gifted musician and composer.