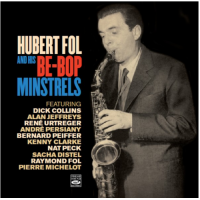 slideshow
French musicians in Paris were among the first in Europe to catch on to bebop's nuances in the mid-1940s. Which is somewhat remarkable, considering what France went through during World War II. Among the Parisian musicians first to pioneer bebop was Hubert Fol, an alto saxophonist and bandleader.

Now, a collection of Fol's leadership sides for France's Swing label between 1947 and 1954 has been issued as Hubert Fol and His Be-Bop Minstrels on Fresh Sound. The two-CD album features Americans Dick Collins and Alan Jeffreys on trumpet, Nat Peck on trombone and Kenny Clarke on drums, plus Rene Urtreger, Andre Parsiany, Sacha Distel, Raymond Fol and Pierre Michelot.

How did bebop reach Paris so early in 1947? My guess is a variety of ways at once. For one, American jazz musicians who could play the intricate form toured in Paris just after the war or moved there. Many brought record collections with them. Jazz in France, of course, dates back to World War I, when black American soldiers were stationed there. Second, Dizzy Gillespie's records for RCA beginning in 1946 were released on French RCA, giving musicians there an opportunity to buy his 78s and study his bop. And third, Voice of America's programming surely included the airing of bop records by artists such as Charlie Parker and others on the New York scene.

In 2010, I interview Dick Collins (above) on his years in Paris and with Fol's Bebop Minstrels:

Dick Collins: Darius Milhaud was leaving Mills College after the war to return to Paris. He said to me, “Why don’t you come to Paris and study with me?” He suggested I study with him there on the G.I. Bill. So I did for a year and stayed until 1949, playing often with drummer Kenny Clarke.

JW: What did you play in Paris?

DC: We just played bebop in clubs. I wasn’t really a bebop player, though. I was in a group called The Bebop Minstrels, but I was never comfortable in the idiom. Bebop was the word then, and you didn’t use any other word to describe jazz. I could play it, but my style wasn’t that way.

DC: He was a prince of a guy. As gentle as could be. He was one of my best friends. His drumming was impeccable. I heard him play with Dizzy Gillespie's big band and he swung it right off the stage. He would go into more intimate, reflective patterns than other drummers.

JW: Who else was in your group in Paris?

DC: We had Jack Weeks on bass and saxophonist Dave Van Kriedt. We all would hang out at Darius Milhaud’s apartment. Kenny and Milhaud got along swell. Milhaud loved his playing, the way Kenny put in small accents and played with soft brushes in small groups. With big bands, Kenny would use sticks. He was so flexible and versatile.

DC: Before I left the U.S. in 1948, I met the girl I was going to marry at Mills College. She was a junior when I left. We wrote letters and stayed in touch. Eventually our letters grew more serious. So I packed up and came home. I was sad to leave France. Paris was so beautiful, and all the guys I’d become friends with were still there. I had played on the Riviera and sailed and played out in the open air for dances. It was a great time to be in France.

Listening to Hubert Fol and his bop groups over this time period, you can't help but appreciate how well they took to the new jazz form. Often driven by Clarke's tough, scattered rhythms, the players sound authentic, with a French soulfulness and passion. As one listens carefully, the cross pollination of 52nd Street bop and Left Bank nostalgia becomes more and more fascinating with each track.