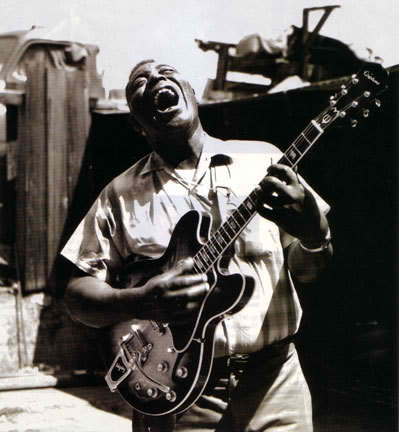 slideshow
Chester Burnett, aka Howlin' Wolf was one of the most primordial and influential figures on the blues scene from the 1950's to the 1970's. His protean voice and harmonica, and rudimentary guitar were a force of nature. Born in Mississippi, Wolf was in a sense a transitional figure who straddled the gap between the great pre-war musicians like Charley Patton and Son House and the later blues-influenced rock 'n' roll musicians like The Yardbirds and The Rolling Stones. He emigrated to Memphis in the early 1950's where he cut some incendiary singles for Sun Records, before finally moving to the blues Mecca, Chicago, where he spent the remainder of his career. This four disc compilation tracks the master takes and a few alternates from from the first half of Wolf's nearly twenty year run at Chess Records. With bassist and composer Willie Dixon brought in as studio straw-boss and contributing songwriter, Howlin Wolf really hit his stride. Developing a stellar songbook that ranged from his first Chess single, the epochal “Moanin' At Midnight" backed with “How Many More Years," through classic Willie Dixon tunes: “Wang Dang Doodle," “Back Door Man" and “Spoonful." Wolf favorites “Evil," “Smokestack Lightnin,'" “I Asked For Water," “Sittin' On Top Of The World" are also included. Accompanying this music is a 45-page booklet filled with photographs and liner essays from Peter Guralnick, and Dick Shurman. Much of the Wolf material was originally released as singles, and thusly has been packaged and re-packaged as music moved into the LP then CD mow MP3 era. While those new to Wolf's music might be better served with a one disc overview, hardcore fans of the blues will be pleased with this well designed and comprehensive collection. Smokestack Lightning: Complete Chess Masters&#151amazon.com