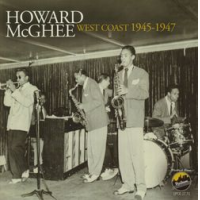 slideshow
In early 1945, Coleman Hawkins asked trumpeter Howard McGhee if he wanted to join him for a month-long gig in Los Angeles at club due to open. The offer came in Buffalo, N.Y., where both musicians were playing and winter had set in hard, McGhee didn't need to be asked twice. Heading West on the road with Hawkins could only have an upside. In a quintet setting, McGhee would have solo time next to an established giant, which would only raise his profile.

When Hawkins and McGhee arrived in L.A. in February, they became the first act to open Billy Berg's new club mid-month. The band either made an impression on audiences or there wasn't much else going on: Berg soon extended their run an extra month. When the gig ended in April, McGhee became part of the Central Avenue pick-up scene, hanging out on street corners to assemble ensembles for gigs that night. McGhee would remain in L.A. until the fall of 1947 before moving to New York.

Now, McGhee's West Coast struggles with bebop and his eventual triumph are documented in a new CD of live sessions called Howard McGhee: West Coast 1945-1947 (Uptown). Today, bebop seems like the natural next step for jazz when ballrooms gave way to nightclubs after the war and music was meant to be heard sitting down instead of flipping dance partners over your shoulder. But the new music from New York was difficult for most musicians to play authentically, and there weren't that many recordings available to help you figure out the feel and phasing. You either became immersed in bebop by playing intensively with a handful of seasoned artists—all of whom were in New York in 1945—or you tried to figure it out on your own, often with limited success.

By September 1945, McGhee had sufficiently established on the Central Avenue scene that he was invited to record four sides for the Philo label, with Teddy Edwards [above] on tenor sax. He then recorded a bunch of pickup sessions throughout the fall. At the end of December, McGhee was at The Streets of Paris in Hollywood with Edwards, where this CD's story begins. As you listen to this gig, you realize McGhee didn't fully grasp bebop's architecture. He viewed it as license to play the trumpet as if it were a machine gun aimed at a tin wall. McGhee didn't realize yet that bebop was more than pyrotechnics and showing off—that you needed to be able to tell a sophisticated story at the same time as you were at the wheel in a musical car chase. The story made the music lyrical and exciting, not the squealing of brakes.

By the spring of 1946, at a Melodisc recording session, McGhee sounded much more confident and aware of how to execute. But his approach was still about speed and out-jamming band-mates. Sweet Potato is an example of McGhee's poetry-less bravado. By June 1947, on an AFRS Jubilee broadcast produced by Gene Norman, McGhee is transformed—and there's a good reason for it. In July 1946, McGhee had been recording with Charlie Parker on the ill-fated Lover Man session, when a depressed and self-medicated Parker returned to his hotel, set fire to the curtains and wound up committed to Camarillo State Hospital. [Above, Howard McGhee and Charlie Parker]

At the end of February 1947, Parker was released and back on the L.A. scene with McGhee, playing a solid month in March at the Hi-Dee-Ho Club. In June, when the album's last three tracks were recorded, McGhee has slowed down and is focusing both on his story telling and daredevil execution. Even on a song like Parker's Ornithology (a new melody based on the chord changes to How High the Moon), McGhee finally comes to the realization that he doesn't have to flap his musical wings as fast as possible to stay afloat but simply feel the wind and glide artfully along a song's chord changes. Gone are the searing lines, replaced by notes that linger, occasional space and improvisation that meanders around a song's melody rather than excoriating it. From June 1947 on, McGhee finally understood bebop. [Above, Howard McGhee, newly arrived in New York in September 1947 at Minton's in Harlem; from left, Thelonious Monk, McGhee, Roy Eldridge and Teddy Hill]