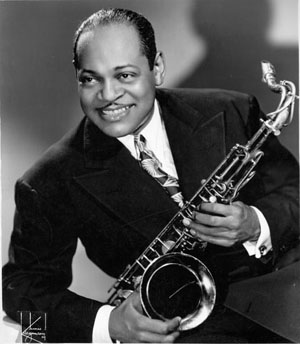 slideshow
Several years before drummer Denzil Best wrote Move, he came up with a catchy bebop line known as Wee. Where Wee was conceived and how it was named is not known to me. But shortly after it made the rounds among musicians playing at New York's clubs on 52nd St., Leonard Feather held a recording session for RCA Victor.

At the recording session, the musicians started by recording three sides—Say It Isn't So, a standard; Spotlite, by Hawkins and named for the 52nd St. club where he was playing; and Low Flame, a song credited to Feather. It's unclear whether the next song was planned or not. I doubt it, since Feather's concept for the song seemed a surprise to one of the musicians:

As Feather wrote in his book, The Jazz Years: Earwitness to an Era: “I went ahead with two sessions [for a bebop album], the first a borderline bebop affair billed as 'Coleman Hawkins' 52nd Street All Stars,' with Allen Eager, Pete Brown, Mary Osborne, Jimmy Jones, Shelly Manne and Al McKibbon. Again, I had a nonpareil ballad in mind as a Hawkins vehicle: Say It Isn't So turned out as well as My Ideal.

“At that time there were a few songs floating around 52nd Street known to everyone by melody but not always by title. One of these was a Denzil Best line on which, imprudently, I suggested having Hawkins and Eager trade fours. We tried one take, but Bean [Hawkins] was clearly uncomfortable, and the concept did not appeal to him; on the take used, he let Eager and Pete Brown divide the honors. We called the tune Allen's Alley, but later found at that Denzil called it Wee.“

The session resulted in the recording of Best's song, which, like Move, would become a jazz standard. Allen Eager, of course, remains one of the unheralded giants of the tenor sax in the 1940s. His playing was razor sharp, fluid and smooth. He could swing in an eerily similar fashion to Lester Young—just before Stan Getz did the same. Getz in 1946 had a gruffer, biting, lower-register tone that would soften and shift higher in the coming years. I'll have more on Eager soon.

JazzWax clip: Here's Wee (Allen's Alley). By the way, dig the gear featured in this YouTube clip. Nice and retro, just the way we like it...