How Music And The Smart Speaker Will Help Each Other Succeed 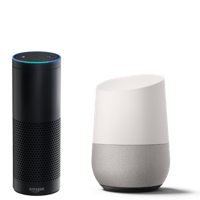 The recent rash of voice-activated internet-enabled speakers (looking at you Echo) have quickly risen to become Pandora's most rapidly growing consumer electronics product. Here we look at how this trend will benefit both smart speakers and the music industry as a whole.

Guest post by Glenn Peoples, Music Insights and Analytics at Pandora from Medium

In fewer than three years, the smart speaker has gone from head-scratcher to head-turner. Along the way, this device has brought artificial intelligence and voice commands into millions of American homes. Usually called voice-activated (VA) smart speakers, they’re often found in the living room or kitchen, taking commands and providing answers like a talking search engine with a surprising sense of humor.

Most importantly to the music industry, these compact appliances excel at playing music. A new report by Edison Research shows 58 percent of VA smart speaker owners had listened to music for an average of 4 hours 34 minutes in the previous week, and 65 percent said they are listening to more music since buying a smart speaker. The latter metric is especially encouraging. Here in the streaming era, the music industry’s most important metric has become engagement. The more often streaming services can engage with listeners, the more revenue will flow to rights holders and artists.

Pandora’s experience confirms Edison’s findings. In the second quarter, 1.6 million active users of VA smart speakers fueled a 282-percent gain in listening time over the same period in 2016. The overall consumer electronics segment had an exceptional quarter, with active users growing 23 percent to 9.7 million, with one in 10 of those users new to Pandora.

Expect more growth in the coming years. eMarketer forecasts 58.9 million people in the U.S. will be VA smart speaker users by the end of 2020, a 178- percent increase from 15.6 million in 2016. (Separately, Gartner believes that by 2020 VA smart speakers will reach $2.1 billion in global sales and 3.3 percent of the world’s households.) Pandora will be ready. As Pandora chief financial officer (and interim chief executive officer) Naveen Chopra explained in the July 31st earnings call, Pandora believes it is “well-positioned and well-integrated” to capture engagement growth in smart speakers and other connected devices.

These speakers have the kind of wow factor that comes just a few times each decade. Free of using hands, you can ask the VA smart speaker for movie times, a weather forecast, the capital of Minnesota, or events on a calendar (they’re also called virtual personal assistant- enabled wireless speakers). As Amazon’s Echo, “What’s your favorite band?” and you might get the reply, “I like Daft Punk. It’s good time dance music.” They connect to other smart home products, too, allowing voice commands to perform functions like setting a thermostat or turning lights off and on.

Audio is the leading factor for buying a smart speaker. About 47 percent of Echo and Google Home buyers like their smart speaker because it plays music and books, according to a new report by Voicelabs, a data and analytics company that provides makers of voice-activated devices insights into listener behavior. Just 29 percent of buyers like their speakers for the control of smart home devices.

To listen to Pandora on a VA speaker, you can ask the device to play a particular Pandora station. The owner of an Echo might say, “Alexa, play my Paul Simon Radio station on Pandora.” (Other devices use similar phrases. Google Home uses the familiar prompt, “OK Google” when giving a command.) If you like a song, say, “Alexa, thumb this song” and Pandora will retain the feedback. To skip, say, “Alexa, skip this song.” If you want to know the artist or song title, say, “Alexa, what is this song?” And if you request an artist station that’s not in your collection, Alexa will offer to create it for you.

The quick ascent of the VA smart speaker is causing companies to re-think how a person engages with music in a voice-only environment. What happens when people aren’t scrolling through an MP3 collection, choosing from one of dozens or hundreds of playlists, or picking a CD to play on the home stereo? Recalling something specific can be tough. Pandora has a great option: when you can’t think of something to play, say “Alexa, play Thumbprint Radio,” the station built on all the tracks a person has thumbed (liked) since registering.

This little device has come a long way in a short amount of time.

Although it’s turning into a must-have gadget, the VA smart speaker got off to an unceremonious start. The press gave Amazon’s Echo, the first of its kind on the market, a tepid reception when it debuted — completely unannounced — in November, 2014. TechCrunch called the Echo “a tad baffling” and “a crazy speaker that talks to you” in its article. Even a veteran Forrester analyst believed Amazon could be “setting the table for a party that consumers aren’t ready to join.”

But consumers got it. Following the popularity of the Echo, now there are handfuls of voice-activated devices for the home. Google Home, Apple’s upcoming HomePod, and Microsoft’s Invoke connect to other smart devices — lights, thermostat, window shades, even the front door lock — in addition to playing music. A long line of voice- activated speakers are now on the market: Ivee Sleek, Voice Pod, Athom Homey, Omaker WoW, Eufy Genie, Jam Voice, and Lenovo Smart Assistant (powered by Harman/Kardon), to name just a handful.

Perhaps the most encouraging aspect of VA smart speakers is their youth. “It’s still very early,” said Larry Rosen, president of Edison Research. Indeed, the product category has not even reached its second birthday, and each device will have numerous iterations and improvements. More consumers will buy devices when prices drop and awareness increases. Today’s owners are just the tip of the spear, so to speak. “In general, as you might imagine, they’re early adopters,” Rosen added.

Another encouraging finding came from a different Edison Research study: 57 percent of VA smart speakers subscribe to a music service, and 28 percent of all owners said their device led them to become a subscriber. This is a familiar dynamic. Just as the iPhone became a launching pad for music streaming services, the VA smart speaker can become a new gateway for streaming services to reach potential subscribers.

The smart speakers studied by Edison are not to be confused with the more familiar small, portable, Bluetooth-enabled speakers popularized by Beats by Dr. Dre, the now-defunct Jawbone, Bose, JBL, and many others. There are no “smarts” to those speakers, no ability to receive voice commands, perform functions or “speak” in a genial tone of voice.

Nor is smart speaker’s AI the technology that super-entrepreneur Elon Musk has called “a fundamental existential risk for human civilization” and famed theoretical physicist Stephen Hawking warned, “could spell the end of the human race.” It’s not on par with the evil HAL 9000 computer in the movie 2001 or the operating system Joaquin Phoenix dated in the movie Her — not yet, at least. Yes, today’s in-home speaker has “intelligence” beyond other household products. But no, these speakers aren’t going to steal American jobs or evolve intelligence that surpasses humans. They’ll be great for music, though.

Smart homes have been part of Americans’ consciousness for decades. In Star Trek, The Jetsons and Back to the Future II, Hollywood’s depiction of the future has foreseen the use of voice commands in the home (or spacecraft). Voice commands aren’t science fiction, they’re real, and they can help push open the door to tomorrow’s music industry.