Hot Track: I Talk to the Trees 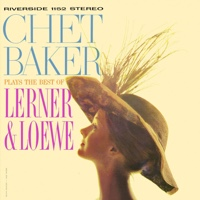 slideshow
In an effort to capitalize on Alan Jay Lerner and Frederick Lowe's Broadway winning streak in the 1950s, Orrin Keepnews of Riverside Records produced an album in July 1959 of Chet Baker playing their songs. Aptly titled Chet Baker Plays the Best of Lerner and Lowe, the album featured the lyrical trumpeter accompanied by some of the prettiest jazz players in New York.

On I Talk to the Trees, from Paint Your Wagon (1951), Baker was teamed with Herbie Mann (fl) Zoot Sims (ts), Pepper Adams (bar), Bill Evans (p), Earl May (b) and Clifford Jarvis (d). The song opens with Evans playing an eight-measure introduction, with May and Jarvis in tow. Baker runs down the song once through. Then Sims takes a bridge solo on tenor saxophone, with Baker returning to continue the melody line. Baker then switches to solo mode with Evans shadowing him. The stillness and beauty of the two musicians is remarkable. Each of their notes hangs in the air for a second or two before disappearing. Mann plays a lovely flute solo, followed by an Evans solo. Baker plays the song out.

Frankly, I can't think of too many other ballads where the sensitivity of each musician is so essential to the song's story and success. It's almost a jam session of softness.