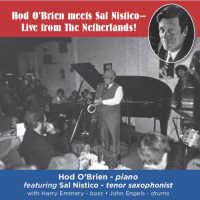 slideshow
Jazz was in a strange place in the 1980s. I remember being fresh out of college and working my first job at The New York Times. There were plenty of clubs in town, but other than the big ones where legends performed, the scene was fairly run down and thin on young people in the audience. The excitement of fusion in the 1970s had led to synthpop and funk in the '80s, and the action was all on MTV and in arenas. Smaller pop acts commanded big fees and full houses at clubs in Greenwich Village, but acoustic jazz musicians trying to earn a living had it rough, and recording opportunities were drying up for them.

Many American jazz musicians headed off to Europe, where they were adored at an endless hive of clubs in major cities. Europe still had sophisticated taste and hadn't experienced the youth-culture overhaul that the States did. In short, radio was tightly regulated there and didn't play as big a role in shaping the culture as in America. In Europe, American jazz musicians found a sanctuary and compatriots. Many artists had moved there in the '70s and established beachheads while those who still lived in the U.S. found plenty of touring opportunities there with solid local sidemen.

Two American musicians who found themselves in Europe in 1986 were pianist Hod O'Brien and tenor saxophonist Sal Nistico. Backed by Harry Emmery on bass and John Engels on drums, O'Brien and Nistico appeared at the Porgy & Bess Club in Terneuzen, the Netherlands, on Dec. 13, 1986. Fortunately, Joop van der Leij was there as well. Joop has always been a big Hod O'Brien fan and a gifted recording engineer. Over the years, he taped virtually everything O'Brien recorded in Europe between 1984 and 2015 with O'Brien's permission and gratitude. He also prepared a complete O'Brien discography. O'Brien died in November 2016.

Last week, O'Brien's wife, singer Stephanie Nakasian, sent along Hod O'Brien Meets Sal Nistico: Live From the Netherlands, recorded by Joop in Dec. 1986. The album features seven tracks—Quasimodo, But Beautiful, Airegin, Indian Summer, Minority, My Old Flame and I'll Remember April. Nistico had mellowed a bit by 1986 but he still had a sharp bite in his attack and was fleet in technique. The big surprise though is O'Brien.

On this album, O'Brien exceeds even himself, providing us with exceptional examples of what made his playing style and solos so exciting. I found I couldn't wait for O'Brien to solo on each track. The sheer beauty and fluidity of his playing is unmatched on his other recordings. I'm hard pressed to name another live O'Brien album that exceeds this one. It was a great night for him. As Stephanie said to me last night by email when I told her my thoughts, “That's what Hod said when he heard the tape. He said, 'I think its some of my best playing. I wish we could release this.' So we did."

Jazz has plenty of selfless heroes—those who recorded artists in their prime so we have evidence of their miraculous abilities. Joop is one of those heroes. So is Stephanie.