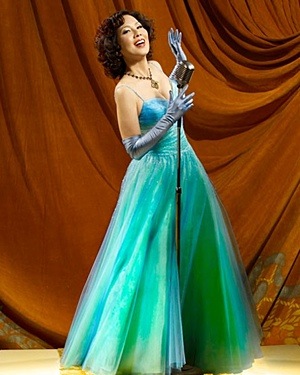 slideshow
Hiromi Kanda doesn't just sing the standards, she embodies them. On her new album, Hiromi In Love-to be released March 16th on the Music Gate label -and the sensational videos that accompany the recordings, due April 13th on DVD, the stirring vocalist transforms each classic into a work of art. With an elegant visual style that matches the grandeur of the songs-timeless Great American Songbook gems such as “My Funny Valentine, “ “In the Wee Small Hours of the Morning, “ and “Cry"-Hiromi places this music back into the context in which it was created while breathing new life into it. And it's all a labor of love.

Recorded with members of the Honolulu Symphony Orchestra, and arranged by multi-instrumentalist/conductor/composer Matt Catingub (who has worked with Rosemary Clooney, Louie Bellson, Michael Feinstein, John Pizzarelli and more) with the award-winning Ignace Jang serving as concertmaster, Hiromi in Love recaptures the ambience of landmark albums by such greats as Frank Sinatra, Nat King Cole and Ray Charles.

“Hiromi Kanda brings a fresh perspective to the great standards of all time, not only with her beautiful voice, but also from her unique and deep cultural interpretations," says Catingub. “She is truly an original, a wonderful talent."

Exposed to American music via the armed forces personnel stationed in her birthplace of Nagasaki, Japan, Hiromi began singing when she was only 3 years old. At the age of 19, she auditioned for the popular television show, A Star Is Born, an American Idol-like predecessor. Winning the contest over more than two million initial applicants, she was signed to a recording contract in Japan. Hiromi released an album that sold well, but ultimately chose to develop her skills as a lyricist.

More recently, due to the respect and love that she and her husband, Yusuke Hoguchi, share for the classic standards, Hiromi decided to pick up the mic again. Mr. Hoguchi launched the Music Gate label, serving as her executive producer as well as collaborator on two of the featured tracks, Blue Love and Always Here For You.

On Hiromi in Love, the singer burrows deep inside the core of songs like “That Old Feeling," “Someone to Watch Over Me," and “When I Fall in Love." She discovers their essence and conveys them as the songwriters-giants such as Sammy Cahn, Rodgers and Hart, Irving Berlin and the Gershwins--intended, as rich, lush encapsulations of human emotion and drama.

“I love this music," Hiromi says. “I love the tension of the chords and the blue notes. When I hear a good song with a good sound, it leaves a deep impression on me. Melody comes first-good melody, good lyrics and good arrangements."

Although the brilliant recordings stand alone, the videos created by Hiromi and her team to accompany the CD-for 11 of the album's 13 songs-add a whole other dimension to her renditions. Attired and bedecked stunningly, Hiromi captures not only the sound of the American pop/jazz classics she so adores, but the look of the era's female divas and film stars.

Hiromi Kanda will be headlining an evening in Los Angeles at Vibrato Grill Jazz, owned by music icon and legendary trumpeter and bandleader, Herb Alpert. She will also perform in New York, Las Vegas, Toronto, and London, on dates to be determined.

Hiromi In Love is distributed by the Alternative Distribution Alliance and Warner Music Group.