SOURCE: ALL ABOUT JAZZ PUBLICITY
July 28, 2008
Sign in to view read count 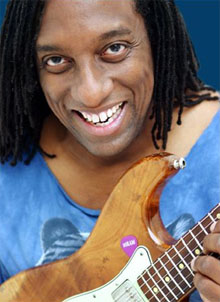 slideshow
Hiram Bullock was a talented and charismatic guitarist, a rock'n'roller with a jazz head who bridged the world of sophisticated pop and the avant-garde New York jazz scene.

A super-session player, Bullock was mentored by the producer Phil Ramone, and his work can be heard on Steely Dan's Gaucho (1980), Paul Simon's One Trick Pony (1980), Sting's Nothing Like the Sun (1987), Billy Joel's The Stranger (1977) and Barbra Streisand's A Star Is Born (1976). He also played with the Brecker Brothers, Jaco Pastorius, Chaka Khan, James Taylor, James Brown and Al Green, among many others. He was a member of one of Miles Davis's last touring groups, and his guitar graced countless jazz albums. Hiram Bullock also put out over a dozen records under his own name.

Bullock was a consummate showman: his live performances were enhanced by his habit of wandering deep into the crowd whilst soloing. “Rock'n'roll guitarists might do that," said the promoter John Cummings, “but it wasn't common at jazz shows. You'd find a sedate jazz audience in Switzerland where the uptight burghers would be surprised by Hiram sitting on their daughters' laps whilst continuing to play. He invented himself as a jazz-rock guitarist and entertainer."

Did such live ostentation from the guitarist reflect the origins of his choice of instrument? “I played bass in my high school rock band (like a million other teenage boys)," Bullock said. “One day our guitarist, who was slightly older and looked like Eric Clapton, passed out while in the middle of the solo on 'Mississippi Queen' (he said later that he was 'tired'). Immediately, 10 girls jumped up onto the stage, stroking, consoling and otherwise 'reviving him'. At that precise moment I decided to switch to guitar."

Hiram Bullock was born in 1955 in Osaka, Japan to parents serving in the US military. When he was two the family returned to the United States, where they settled in Baltimore, Maryland. Hiram studied piano at the Peabody Conservatory of Music in the city, playing his first recital at the age of six. He also became a fluid saxophone player, and finally made the switch from bass to guitar at 16.

At the celebrated University of Miami music college, Bullock studied alongside Pat Metheny, Jaco Pastorius and Will Lee, discovering musical soul-mates. He paid his way at university by playing nightclub gigs in Florida, and hooked up with the singer Phyllis Hyman. When she landed a recording deal and moved to New York, Bullock went with her.

In Manhattan he made an immediate impact. 'He was a phenomenon,' remembered Jamilla Samuels, a sound engineer at the Mix Studio. “All the players were talking about this new cat in town with this great guitar style. If you had a buzz like that amongst the musicians, it meant you were good. But I noticed that straightaway he fell in with the fast crowd."

Soon Bullock was playing with the master saxophonist David Sanborn and the Brecker Brothers band. He then formed the 24th Street Band with the drummer Steve Jordan, the keyboardist Clifford Carter and bassist Mark Egan, later replaced by Will Lee. Very popular in Japan, the 24th Street Band released two records there, with the keyboard player Paul Schaffer producing the second. Schaffer recruited Bullock, Jordan and Lee for his group the World's Most Dangerous Band, which played on the talk show Late Night With David Letterman from the programme's dbut in 1982, bringing to national attention the guitarist's habit of performing barefoot.