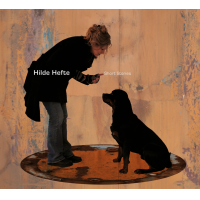 Six years have past since Hilde Hefte released the album An evening in Prague together with jazz quartet and The City of Prague Philharmonic Orchestra; a record which got the most wonderful reviews from all around the world.

So what do you do after such a success? Well, Hilde turns around and do the quite opposite and take the music down to either standing alone in her music or in a duo format.

This record is like a collection of short stories therefore the album title.

Hilde is saying: “It is either duo-converstations or conversations with myself. This is something I had to do. I had to challenge myself to be able to move on."

The album contains genres we believe some of you are not expecting to find on a Hefte album, and you will also find constellations almost never recorded in the genre of jazz before; like duo harp and vocal.

On harp is the well known Norwegian harpist Sidsel Walstad and she is performing some outstanding harp-arrangements written by Egil Kapstad.

This time Hilde is doing a lot more herself – she is writing most of the music arrangements herself, playing several of the instruments and last, but not the least; singing several tracks a cappella.

To receive the dimension and the depth she wanted for this album she decided to bring in a much younger person than herself to be the producer. She chose Simen Hefte Endresen. And what a clever move to bring in a person who is listening to music in a different manner than herself.

Simen is Hilde’s son and she is saying, “it is very special being able to work with your son on such premises, and at the same time knowing you didn’t ask him because he is your son, but because he’s one of the best."

Genre-wise it goes from jazz, alternative and pop-music to folk-tunes, but we have to say; you will find several really wonderful jazz ballads too.

Is she happy? Yes!

Hefte quote: “More than happy; and at the same time very proud. I have done something I’ve never done before, because I’ve been afraid to try; so on these premises this album is the best I’ve ever recorded."

Musicians duo together with Hilde Hefte: