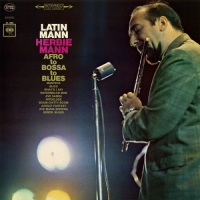 slideshow
Herbie Mann was a fascinating jazz figure. The flutist and saxophonist was a dominant player in the 1950s, recording prolifically as a leader and sideman, and always bringing tremendous swing and lyricism to his work. Both of Mann's parents were dancers, so his keen sense of time makes perfect sense. Tall and lean, he became the prototype for beat-generation beboppers, coffee-house bongo players, the folk-jazz hipsters and Greenwich Village VW-driving daddy-o's.

Mann also had a eye and ear for the cutting edge. On his covers, he was first to have long sideburns, first to wear a shirt with thick red stripes, first to wear a Pendleton shirt, first to wear no shirt and he had a goatee before all the folkies. As for music, he was among the first (along with Paul Winter) to leverage the bossa nova at the dawn of the 1960s in Rio. From there, he was among the first flutists to connect jazz to Latin, African and World music. He even dipped a toe into early disco in 1975, covering Barrabás' Hi-Jack (as Hijack Your Love) and came up a winner. [Photo of Oliver Nelson above courtesy of Amazon]

In 1965, Mann recorded two superb albums with arranger Oliver Nelson. Together, they had a fresh and breezy contemporary sensibility on ballads, waltzes and Latin barn-burners. The two albums were Latin Mann: Afro to Bossa to Blues, recorded in June, and Herbie Mann Today!, recorded in November.

Latin Mann is a terrific, with superb arrangements by Nelson, who shifts with ease between jazz and complex Latin statements. On paper, the songs seem like poor choices for the venture. What I Say, Bijou and Let's Boom Chitty Boom all appear a little odd. But when the needle hits the wax, you realize these two artists could record Mairzy Doats and they'd sound phenomenal. The high point for me is Manteca (written by Dizzy Gillespie, Chano Pozo and Gil Fuller), with Nelson going all out and Mann surfing along on top.

Herbie Mann Today! has a more groovy sound, with Nelson drawing back his big orchestral artillery to let Mann float around on flute. The album cover is an example of op-art influenced by the Museum of Modern Art's very “today" Responsive Eye exhibit, which ran from February 23 to April 25 1965 before moving on to St. Louis, Seattle, Pasadena, Ca., and Baltimore. The Beatles' Yesterday is a gorgeous cover, and the same goes for Mann and Nelson's cover of The Night Before, giving the Fab Four hit an intoxicating boogaloo feel. The high point for me is Edu Lobo's Arrastao. Overall, the album sounds like the 1960s I remember. It's naturally with-it, laid-back and ferocious when necessary.

I love running these two albums together, one after the other. They both feature Mann's tasty flute and Nelson's powerful Latin undercurrent and sassy brass writing. In later years, Mann became overly taken with himself and relentlessly determined to seem “now," eventually becoming a punch line. But in the 1960s, he was still among the hippest fusion musicians around and one of the finest jazz flutists on the scene. It's really time to reconsider his catalog.

And here's a spectacular cover of The Night Before from Herbie Mann Today!...