Henry Mancini's "The Classic Soundtrack Collection"(9-CDs) to be released November 18! 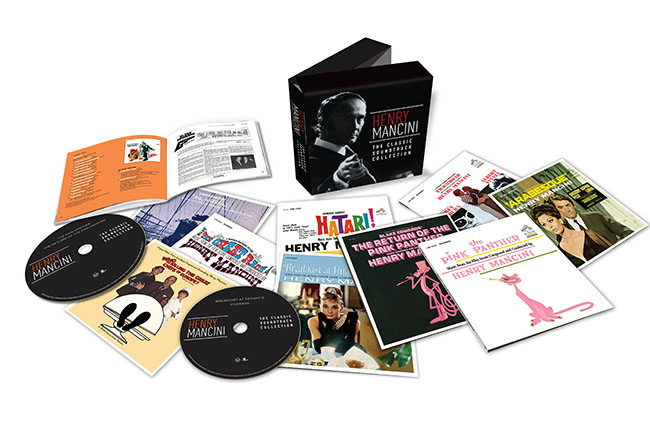 Scores feature jazz and pop standards, including “The Pink Panther Theme,” “Moon River” (from Breakfast At Tiffany’s) and “Baby Elephant Walk” (from Hatari!)

Legacy Recordings, the catalog division of Sony Music Entertainment, is proud to announce the release of Henry Mancini’s The Classic Soundtrack Collection on Tuesday, November 18th. In a career that spanned nearly half a century, Henry Mancini (1924-1994) became synonymous with catchy, jazzy, romantic music for film and television soundtracks. The Classic Soundtrack Collection, showcases all of Mancini’s soundtrack albums for the RCA, Epic and Columbia labels, including several of his most iconic and beloved scores.

The Classic Soundtrack Collection features 18 original Mancini soundtrack albums on 9 discs plus rare bonus tracks, including a never-before-heard version of “Nothing To Lose” from writer-director Blake Edwards’ 1968 comedy The Party performed by Julie Andrews. Taken together, the albums in this collection underline the enduring popularity of Henry Mancini and his unique ability to create movie music that pop audiences could also embrace.

The son of Italian immigrants, Mancini studied at New York’s prestigious Juilliard School of Music before joining the Glenn Miller Orchestra in 1946 as a pianist/arranger. From 1952 to 1958, Mancini was contracted to create soundtracks for films for Universal-International Studios, including the Oscar-nominated The Glenn Miller Story and the brassy, suspenseful score to Orson Welles’ Touch Of Evil. From there, Mancini gained widespread acclaim as an independent composer and arranger, winning four Oscars and 20 Grammy Awards during his career.

Mancini’s greatest collaboration may have been with Blake Edwards; they first worked together on Edwards’ 1959 television series Peter Gunn. The iconic jazz theme was an international hit and winner of two Grammy Awards and an Emmy Award. The duo would collaborate on such films as Breakfast At Tiffany’s (featuring the immortal pop standard “Moon River,” written by Mancini with lyricist Johnny Mercer) and the Pink Panther series of comedies (the slinky, saxophone-driven instrumental theme remains one of cinema’s most recognizable standards).

Elsewhere in Hollywood, Mancini earned critical and commercial acclaim with scores to films like Hatari! starring John Wayne and featuring the playful “Baby Elephant Walk”; the Cary Grant/Audrey Hepburn mystery Charade, and the comedy-drama Two For The Road, Mancini’s personal favorite of the many themes he composed.