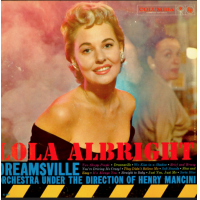 slideshow
Henry Mancini didn't arrange too many albums for non movie-soundtrack singers. Doing so wasn't his bag, since he felt his music was enchanting enough to stand on its own. But he made a handful of exceptions in the late 1950s, a time when he had a spare few hours to do singers a favor. There were two Mancini-arranged 45s produced by Verve in 1957 for singer Linda Lawson (Somehow, More Than Ever, Salty Salty Is The Sea and Never Like This). There also were two painful novelty albums—Edie Adams' Music to Listen to Records By (1959) and Terribly Sophisticated Songs: A Collection of Unpopular Songs for Popular People (1958), featuring a batch of unremarkable songs and singers with music arranged by Mancini without a credit.

The only vocal album arranged by Mancini during this period that remains truly remarkable is Lola Albright's Dreamsville (1959). Albright, of course, starred on the TV detective series Peter Gunn as the Gunn character's girlfriend. Albright has a husky, relaxed vocal timbre, and Mancini's arrangements and piano are beautiful. Mancini's music has long been likened to a dry martini. If that description is apropos, the songs on this album are the olives.

JazzWax tracks: Lola Albright's Dreamsville (Columbia) can be found here paired with her Lola Wants You, arranged by Dean Elliott.

And here's Ablright in 1958 on Peter Gunn singing How High the Moon, arranged by Mancini and featuring Shorty Rogers on flugelhorn...