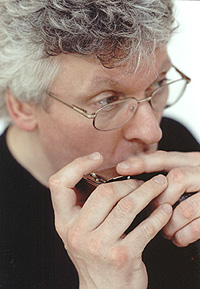 There were two musical epiphanies that altered the course of young Hendrik Meurkens' life. The first came as a teenager growing up in Hamburg, Germany. “My parents had maybe two or three jazz albums in their collection," he recalls, “and one of them was a Benny Goodman album, 'Live at Carnegie Hall', with Lionel Hampton just burning on it. And that was it for me. I needed to play vibes after hearing that."

Hendrik's second musical epiphany came some years later, at age 19. “That's when I first heard Toots Thielemans," he says. “...And I had to play harmonica after that." Both of those life-changing events account for Meurkens' rather unusual double of vibes and harmonica. “That definitely puts me in the history books right there," he laughs. “One is easy to carry, the other one is impossible to carry. It just happened that way."

Some other key influences during Hendrik's formative years account for his solid grounding in bebop. “I'm a Charlie Parker guy," he says. “I transcribed so many of Bird's solos and Dexter Gordon's and those of other greats. That's why I'm a two-mallet guy instead of a four-mallet player. I'm more comfortable playing lines rather than comping."

But it was Hendrik's immersion in the music of Brazil, which intensified after relocating to Rio de Janeiro for a time during the '80s, which helped him to find his own distinctive voice as an artist. By combining his twin passions of jazz and Brazilian music, Meurkens created a unique hybrid of bebop and chorinhos that has marked his musical output over the past 17 years, beginning with 1991's SAMBAHIA for the Concord label. Meurkens subsequently released a string of acclaimed recordings through the '90s, showcasing his dual talents on harmonica and vibes.

Last year's NEW YORK SAMBA JAZZ QUINTET, his debut on the ZOHO label, utilized the stellar Brazilian musicians Helio Alves on piano, Gustavo Amarante on bass and Adriano Santos on drums along with American tenor saxophonist-flutist Jed Levy. That copacetic crew returns on SAMBATROPOLIS, Meurkens' follow-up on ZOHO and 17th overall as a leader. “Since I lived in Brazil, I was always spoiled with what sounds good in Brazilian music," says the vibist-harmonica ace who is also an accomplished composer. “Here in New York I always try to get a strong Brazilian rhythm section because it is a specific vocabulary that requires such a different touch. So then if I play not quite all the way Brazilian on top of that, it doesn't really matter that much anymore because the whole package is Brazilian. That's very important to me."

You can feel that authentic Brazilian vibe throughout Sambatropolis. From the energized opener (the chops-busting title track inspired by renowned Brazilian composer Joo Donato) to the infectious closer (a sambafied rendition of the often-covered jazz standard “Bernie's Tune"), the music is grounded in solid Brazilian grooves and brimming with Hendrik's agile, flawless lines, alternately played on vibes and chromatic harmonica. Add in bristling chorinhos like “The Bee" and “Choro da Neve," poignant ballads like Hendrik's own “A Summer in San Francisco" and “Ocean Lights" along with two elegant Jobim compositions and you have a well-rounded picture of Hendrik Meurkens as both player and composer.

“I feel completely comfortable within the Brazilian style, especially on harmonica," he says. “That instrument with Brazilian jazz is a complete natural. In playing straight ahead jazz, I'm always happy if there's vibes around. In Brazilian music, it's not necessary. Also on harmonica, it always sounds good if you have ballads with beautiful harmonies. And with Brazilian music that's what it's all about."

In past outings, Meurkens experimented with the blend of harmonica and trumpet with the great Claudio Roditi (on 1991's SAMBAHIA and 1992's CLEAR OF CLOUDS) and also the mellow sound of Jay Ashby's trombone (on 1993's A VIEW FROM MANHATTAN and 1996's POEMA BRASILEIRO). This time out he investigates the blend of harmonica and flute on “Ocean Lights" along with a two-tenor front-line of Jed Levy and Rodrigo Ursaia on Jobim's alluring bossa nova “Fotografia" and the energized title track. “I'm searching for what can be done, what sounds good," says Meurkens. “And some of these things just happen in the studio. For instance, I had the idea that the two-tenor thing plus the harmonica could be a nice touch, and it turned out well." On two chops-busting showcases, “The Bee" and “Choro da Neve," the band works within the exuberant chorinho form, full of challenging unison lines over intricate chord changes. “The choro is a very important genre in Brazil and is highly respected among musicians," he explains. “What I play is not the classic choro of Pixinguinha and all the old guard Brazilian guys, which I love. As soon I bring in my own jazz background and add in jazz instruments it becomes something different. And maybe that's my contribution to the music...taking chorinho into the jazz context. It's chorinho-jazz fusion and it really works."

Elsewhere on SAMBATROPOLIS, beautiful ballads like “Ocean Lights" and “A Summer in San Francisco" showcase Meurkens' highly expressive approach to harmonica and vibes, respectively. “Ballads and harmonica playing seem to go together well," says Hendrik. “I can't really go up there and play late Coltrane stuff on harmonica. I could try but it's not what I hear. I need the beauty, I need the melodies, and I need the chorinho lines. So each time I do a new project, I'm trying to find a setting for my sound."

The urgent stop-time vehicle “Hot & Stuffy" is a minor blues that Hendrik wrote as a straight ahead jazz tune several years ago. “We tried it as a samba jazz tune this time and it worked great," he says. “It's basically my minor blues blowing tune. The head is hard to play, but once you're in the C-minor solo, you can relax and just blow."

The CD closes on an ebullient note with a samba rendition of the jazz standard “Bernie's Tune." As Hendrik explains, “That was very spontaneous the way it worked out. I had just asked Ian MacDonald, 'What jazz standard can we do Brazilian style?' And he had listened to that tune on the way to the studio, so he suggested it. And it turned out to be a lucky strike. But you can put almost any standard in samba or bossa nova and it will sound good. It just works." Everything seems to work on this appealing collection of ballads, blues, bossas and effervescent chorinhos. And Meurkens delivers with heartfelt conviction and spirited virtuosity on both of his chosen instruments.