SOURCE: TWO FOR THE SHOW MEDIA
January 29, 2009
Sign in to view read count 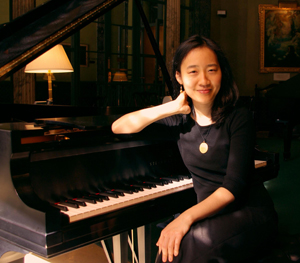 slideshow
Helen Sung & Ron Carter will be performing in concert together at The Rubin Museum in NYC on Febraury 6th, 2009 at 7:00PM as part of the 2009 Winter/Spring Harlem in the Himalayas Series.

Pianist Helen Sung has been called “one of the brightest emerging stars in jazz today.” Her music is described as “marvelously imaginative,” “astonishing;” and her CD Helenistique (Fresh Sound Records) was praised as “…one of the year’s most exciting listens.” (JazzTimes). With a new CD (Sungbird, after Albniz) on Sunnyside Records and winning the Kennedy Center’s 2007 Mary Lou Williams Piano Competition, good things are happening! Of Chinese heritage and a native of Houston, Texas, Helen attended Houston’s High School for the Performing and Visual Arts (HSPVA). Originally an aspiring classical pianist, Helen was bitten by the jazz bug while pursuing undergraduate studies at the University of Texas at Austin. She decided to switch to jazz after being accepted into the inaugural class of the Thelonious Monk Institute of Jazz Performance at the New England Conservatory of Music. An intensive program accepting only seven students (forming a jazz septet), the Institute proved to be an unprecedented opportunity to study and perform with some of the greatest masters of jazz music.

Helen presently lives in New York City, and has gone on to work with such jazz masters as Clark Terry, Steve Turre, and legendary composer and saxophonist Wayne Shorter – and with such jazz luminaries as Regina Carter, Steve Wilson, and T.S.Monk. She has also performed with such big bands as the Charles Mingus Big Band, Diva, and is a current member of Clark Terry’s “Big Badd” Big Band. In addition to her work as a sideman, Helen is steadily gaining prominence as a bandleader. She was a featured guest on Marian McPartland’s acclaimed NPR Piano Jazz show and XM Satellite’s In the Swing Seat w/Wynton Marsalis. In print, Helen has feature pieces in such publications as Downbeat, JazzTimes, JazzIz, and AllAboutJazz-New York. Her band works both nationally & internationally, performing at venues & festivals including the Kennedy Center’s 2008 Mary Lou Williams Jazz Festival, the 2008 Clifford Brown Jazz Festival, the 2008 Vermont Mozart Festival, Marian’s Jazzroom (Bern Jazz Festival), the 2008 Jazz Lucca Donna (Italy), the American Jazz Museum’s ‘Blue Room,’ Cleveland’s Tri-C Jazz Festival, The Philadelphia Museum of Art, and New York City’s finest jazz clubs. Her experience at the Monk Institute inspires her to remain committed to educational endeavors; she performs for arts organizations (including JazzReach) and presents clinics at colleges and universities. Helen’s band also conducted a jazz residency program (made possible by a Chamber Music America/Doris Duke Foundation grant) benefiting underserved youth in Camden, NJ.

Ron Carter is among the most original, prolific, and influential bassists in jazz. With more than 2,000 albums to his credit, he has recorded with many of music's greats: Tommy Flanagan, Gil Evans, Lena Horne, Bill Evans, B.B. King, the Kronos Quartet, Dexter Gordon, Wes Montgomery, and Bobby Timmons. In the early 1960s he performed throughout the United States in concert halls and nightclubs with Jaki Byard and Eric Dolphy. He later toured Europe with Cannonball Adderley. From 1963 to 1968, he was a member of the classic and acclaimed Miles Davis Quintet. He was named Outstanding Bassist of the Decade by the Detroit News, Jazz Bassist of the Year by Downbeat magazine, and Most Valuable Player by the National Academy of Recording Arts and Sciences.

In 1993 Ron Carter earned a Grammy award for Best Jazz Instrumental Group, the Miles Davis Tribute Band and another Grammy in 1998 for Call 'Sheet Blues', an instrumental composition from the film 'Round Midnight. In addition to scoring and arranging music for many films, including some projects for Public Broadcasting System, Carter has composed music for A Gathering of Old Men, starring Lou Gosset Jr., The Passion of Beatrice directed by Bertrand Tavernier, and Blind Faith starring Courtney B. Vance. Carter shares his expertise in the series of books he authored, among which are Building Jazz Bass Lines and The Music of Ron Carter; the latter contains 130 of his published and recorded compositions.

Carter earned a bachelor of music degree from the Eastman School in Rochester and a master's degree in double bass from the Manhattan School of Music in New York City. He has also received two honorary doctorates, from the New England Conservatory of Music and the Manhattan School of Music, and was the 2002 recipient of the prestigious Hutchinson Award from the Eastman School at the University of Rochester. Carter has lectured, conducted, and performed at clinics and master classes, instructing jazz ensembles and teaching the business of music at numerous universities. He was Artistic Director of the Thelonious Monk Institute of Jazz Studies while it was located in Boston and, after 18 years on the faculty of the Music Department of The City College of New York, he is now Distinguished Professor Emeritus although, as a performer, he remains as active as ever.