At the heart of the Margaux appellation, 66 hectares of gravel and grasses overlook the waters of the Gironde. Vines with a view… the hallmark of a great terroir, here embodied by two wines: Palmer and Alter Ego. Every spring, their renewed assemblage gives rise to an event: Hear Palmer, an interpretation of the current vintage, before an audience, in the barrel cellar, by renowned jazz artists. This year, for the concert’s 8th edition, Archie Shepp Quartet joined in the improvisation… 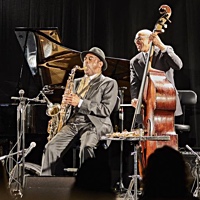 It’s Château Palmer’s secret garden, in the shadow of its vineyards, at the heart of its village: the winery. It’s here, in the spring, that the year’s assemblages are expressed for the first time… in music. For, although these primeurs may certainly be tasted, they may also be heard. Surrounded by barrels, the invited jazzmen offer live their visions of the new vintage of Palmer and Alter Ego. Improvisations nourished by several days of immersion in the universe of Château Palmer: its fauna, it flora, its philosophy, its wines… The jazz expressions of a terroir which sings to those who listen.

Jazz in the Wine

The association rings true. Wine and jazz pay heed to no diktat, obey no predefined rule. Both draw inspiration from a fertile history. Both are perpetually reshaped, by improvisations and interpretations. Both are devoted to pleasure, to the moment. As Thomas Duroux, director of Château Palmer, puts it, “Wine and jazz share a kindred spirit. They both draw from their heritage, to finally reinterpret it, again and again.”

The 2016 Vintage, by Archie Shepp Quartet on March 31st, in the winery’s barrel cellar, Archie Shepp Quartet had taken the stage to deliver their impressions of Palmer and Alter Ego 2016. It’s a vintage with the makings of greatness, born of a year of uncommon weather conditions. To begin, there was an exceptionally mild winter, followed by a particularly rainy spring and a relatively cool summer, which together would delay the harvest until October 3rd —the latest ever recorded. As for the quality of the grapes, their aromatic intensity proved to be extraordinary. After the first months of maturation, the wines have in turn distinguished themselves by their singular equilibrium, balancing generous textures and velvety character. A wealth of inspiration for Archie Shepp, renowned for the richness and audacity of his musical aesthetic, at once intensely personal, dense, rhythmic, and at times, ineffably tender. An inimitable signature, joining in harmony with two others: it’s a concert of the exceptional.

Born in 2009 of a meeting between jazz pianist Jacky Terrasson and Thomas Duroux of Château Palmer, Hear Palmer has since flourished, with seven years of concerts and counting.

To discover the previous editions, visit the website hear-palmer.com.

Saxophonist, composer, pianist, singer, poet engagé and playwright… At 80 years old, this musical renaissance man is a founding figure of free jazz, and a NEA Jazz Master. Launching his career in 1962 with an album recorded alongside Bill Dixon, Archie Shepp went on to collaborate with one legend after another, from John Tchicai to John Coltrane. At the same time, enriched by his travels and concerts in Africa, he affirmed his own identity as an African American musician – a common thread throughout in his prodigious, audacious oeuvre. A body of work in perpetual expansion, as evidenced by his continued collaborations with such artists as Naïssam Jalal, Cheick Tidiane Seck, Rocé, Napoleon Maddox, Hamid Drake and Oliver Lake.

A piano virtuoso from an early age, this Frenchman studied at the prestigious Conservatoire de Paris before founding the quartet H! Today, at just 25 years old, he accompanies Archie Shepp in numerous projects.

Residing in France for more than a decade, this Philadelphia native took first place in the 1996 Thelonious Monk International Bass Competition. Today he accompanies artists of international renown, from Robert Glasper, Ravi Coltrane and Didier Lockwood to Archie Shepp.

For more than 18 years now, this American born graduate of Berklee College of Music has accompanied Archie Shepp on the drums. At Shepp’s side, he has recorded ten albums, while also collaborating with numerous other artists, from Yusef Lateef, Sam Rivers, and Freddy Hubbard, to Horace Parlan and Benny Golson.