Songs on McIntyre’s third record will largely be about becoming nobody, which he says is based on Ram Dass’s talks on ego vs. identity vs. the soul.
&#151Chad Radford, Creative Loafing 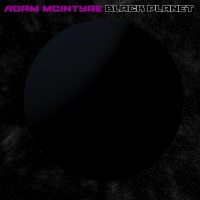 slideshow
Blues guitarist Adam McIntyre first started jumping on stages at just fourteen-years-old and is now best known as the front man for Atlanta-based rockers The Pinx. During the pandemic, McIntyre has created a trilogy of solo albums, the third of which, Black Planet, a tribute to Prince and Miles Davis, will be released on Sept. 18th. The thirteen-minute album closer “Voodoo" premieres today. Scroll down to listen.

“I slept in the first morning of lockdown," McIntyre says. “The next day I woke up and fed the dogs, made coffee and told my girlfriend, 'I’m gonna go downstairs to the studio and start on that blues album I’ve been thinking about doing.' I’d wanted to revisit my blues roots and make an album with a variety of blues styles where I took on personal demons such as depression. Two hours later, I came running back up the stairs and said, 'Okay! One song down.' I did a song or two a day for a week, got a little help on one track from Wayne Kramer. I released that album (The Devil Got My Soul!) a week after I started it. I took about two days off again. Depression and anxiety started revving up."

“Then I tripped so hard on mushrooms that I had a two hour-long conversation with the sun and wrote a psychedelic funk record about the whole experience. It was highly influenced by Funkadelic, Dungen and Devo. Whereas making the blues record had felt kind of dark, because I took the emotion of it very seriously, this record felt joyful from the first note. You’re Doing It Right is extremely silly and personally profound at the same time. It took two weeks from start to finish."

“Black Planet took about six weeks, because it needed a little more shine than its predecessors. I’d spent a couple records digging deep, opening up and to me the next logical step was to ask 'who do I think I am?' I seem to have decided that I know who I think I am, but what if I’ve been wrong? I’d been wanting to do some sort of homage to Prince since visiting Paisley Park last summer, and I decided to put on the vibe that I felt at that studio while exploring some ideas of identity and personality on a record. It was profoundly freeing to be able to head into the studio and just keep doing funky pop songs every day."

“A little jazz crept in; I have wanted to have a jam like something off of Miles Davis’s Bitches Brew and I finally made it happen on this last track, 'Voodoo.' I pictured three voodoo priests casting a spell, and keyboardist Roger Manning Jr. (Beck, Jellyfish, The Lickerish Quartet) and horn player Dashill Smith (The Omega Level, Common Ground Collective) really added to the brew.

“In 'Voodoo' during my solo, I thought about the peaceful protests and the anger and frustration they feel watching as the protests are infiltrated by violence and are met with violence. I hoped that the struggle would not be forgotten or dismissed but that instead positive, lasting change would occur.

It’s all tied together by the 'Black Planet' interludes, straddling the line between funk and jazz. I came up with that groove after having a dream that I saw another Earth in the sky when I looked up, and that it was black."