He Opened Door to Jazz in Cuba 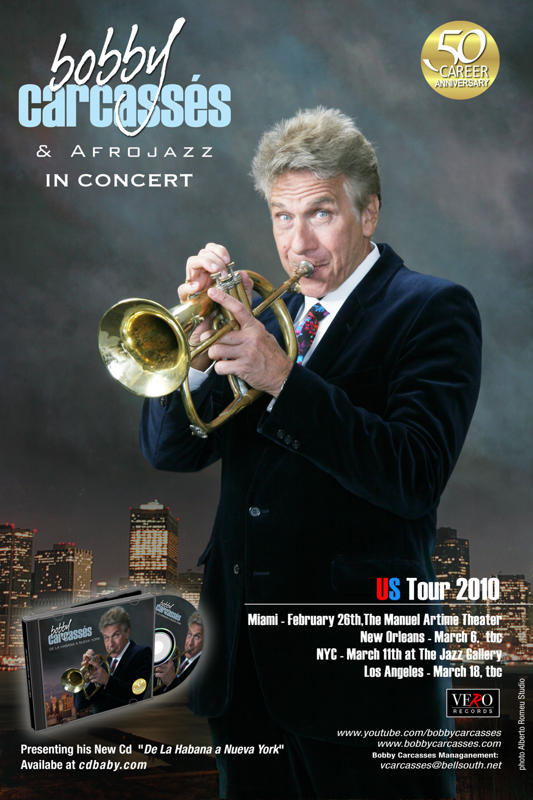 slideshow
With his dark blue velvet suit and carefully groomed white hair, Bobby Carcasses does not look like a rebel, but like a man who is happiest at the center of an old-fashioned cultural salon. On a sunny afternoon last week, he seemed right at home in CubaOcho, the plush Little Havana gallery and lounge, talking softly about the infinite dimensions of art.

But to generations of Cuban jazz musicians, Bobby Carcasses, 71, is a hero, the man who made their music possible. It was Carcasses who, in 1980, when jazz was officially frowned upon as music of the imperialist United States, launched the Jazz Plaza Festival, now the Havana Jazz Festival, the platform that enabled jazz to grow on the island.

“If it weren't for him we wouldn't have jazz in Cuba," says Ever Chavez, who is presenting Carcasses on Friday at Little Havana's Manuel Artime Theater with a group of his Havana protgs, now some of the hottest players on New York's Latin jazz scene.

“He was one of the most courageous musicians in Cuba," says Dafnis Prieto, a much lauded New York-based jazz drummer who played with Carcasses in Havana and will appear in Miami. “Because he said we need a jazz festival, we have jazz musicians in Cuba and we have to develop that. He said jazz is not an American style--it's a universal style.

“For me, Bobby Carcasses is a musical guru."

Although Carcasses started the Havana festival, now a highly successful international event, he was permitted to serve as its director only the first and third years. Nonetheless, he has remained on the island, promoting the music that has been such a powerful and personal creative outlet for him, and inspiring others to play it too.

“Why have I struggled to continue promoting jazz?" he says. “Because it is so important... not just as a music, but as a philosophy, a philosophy of freedom. Jazz is completely free."

Carcasses has served as a mentor for generations of Cuban jazz players, many of whom have gone on to important careers on and off the island.