Hayes Cannonball Legacy At The Seasons 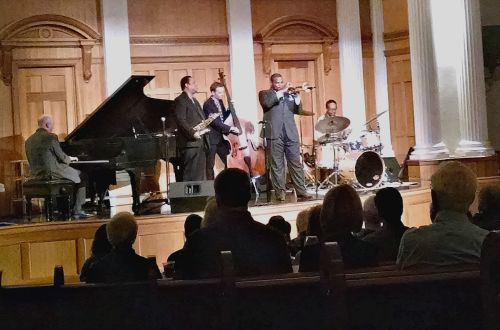 slideshow
The Seasons performance hall in Yakima, Washington, kicked off its new jazz series last night with drummer Louis Hayes and his Cannonball Adderley Legacy band. The Hayes quintet is dedicated to interpreting the music of Cannonball Adderley (1928-1975) and his cornetist brother Nat (1931-2000).

Alto saxophonist Vincent Herring, trumpeter Jeremy Pelt and pianist Rick Germanson have been with Hayes for years. At The Seasons, the young Seattle bassist Michael Glynn joined on short notice, demonstrating an understanding of the repertoire and the spirit of the band.

Hayes recently suffered a hip fracture in a parking lot fall from the group’s van during their tour of the Pacific Northwest. In Yakima, once he moved from a wheel chair to the drum stool, there was no indication that the accident affected his playing. He swings hard, listens closely to his soloists and tailors his accompaniments to their inventions and moods. From the opening “Jeannine,” Hayes demonstrated firm management of the band from the drum set—and a quiet personality; he leaves announcements to Herring. Hayes solos infrequently. When he cut loose at length last night, as on the Quincy Jones piece “Jessica’s Day,” he elevated the already considerable level of excitement. Introducing Nat Adderley’s “Work Song,” Herring went to humorous lengths to tell the audience how sick of it he became after playing the song every night for years in Nat’s band. Then he soloed on it as if discovering it. Herring’s most Cannonball-like work of the night came on “Autumn Leaves.” On the same piece, Pelt played into a Harmon mute and constructed a solo that made ingenious use of repeated phrases. Thirteen years after his debut as a young lion influenced by Freddie Hubbard, Pelt is one of the most personal and identifiable of the trumpeters of his generation who came to prominence early in the century. In Germanson’s feature, Duke Ellington’s “Prelude to a Kiss,” the pianist was both soft and rhapsodic, with passages of block chords as well as delicate phrases in the upper register.

There is no video of last night’s performance. Corey Weeds to the rescue. Here is the band with bassist Dezron Douglas in an earlier appearance at Weeds’ club, The Cellar, in Vancouver, BC. They play a staple of the Adderley book, Eddie Vinson’s “Arriving Soon.”

The Seasons dropped most jazz and classical music for a few years in favor of other genres. New concert series in both fields are hopeful signs for the future of a hall that is an acoustic marvel.