Have You Met Inez Jones? 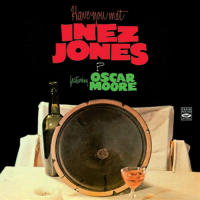 Mention West Coast jazz and you probably think of musicians such as Chet Baker, Bud Shank, Art Pepper, Russ Freeman, Conte and Pete Candoli, Shelly Manne, Lou Levy and Jack Sheldon. What do they all have in common? They were all white. Not that there's anything wrong that. But in Los Angeles in the 1950s, there also were many top-flight African-American jazz studio musicians who had an equally tasteful, laid-back studio sound.

Entitled, Have You Met Inez Jones?, the LP for Hollywood's Omega label would be her only album. Riverside somehow wound up re-issuing it a short time later on its label with a different cover, probably because Omega couldn't do much for her and Orrin Keepnews loved her voice. I suppose part of Jones's under-recorded career had something to do with an unwillingness to tour to support albums and that she wasn't as glamorous or as photogenic as other singers.

Still, the fact that Jones recorded only one album is almost criminal given how good she was on the Omega session. Instead, Jones apparently spent much of her career singing and playing piano at clubs in the Bay Area, notably the Harem Club and Rainbow Inn. Which is a shame for those who love her voice.

Born in Memphis, Tenn., Jones relocated to Kansas City before America's entry into World War II, met and married saxophonist Paul Jones, and remained there singing from 1940 to 1945. Then the couple moved to California, stopping first in L.A., where she worked after-hours clubs. At some point in 1952, she was in New York and recorded four sides for RCA. Up in the Bay Area, Inez Jones and husband Paul lived in Oakland.

Teamed with Jones on Have You Met Inez Jones?, Oscar Moore put his years in the Nat King Cole Trio to work running tasteful lines behind her. Jones had a warm, knowing voice in the happy-go-lucky mold of Sarah Vaughan and Maxine Sullivan. She also had a terrific range that was toasty on both ends. But too little is known about her. Surprisingly, based on my research, she wasn't interviewed much either.

And here's Moore with Vinneger on Angel Eyes...