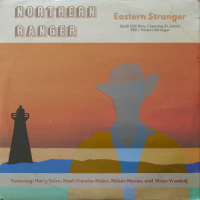 The young Canadian drummer Harry Vetro has followed his debut album as a leader, Northern Ranger, with a shorter CD of four tracks. The new album has a similar title, Eastern Stranger, but perhaps that won’t create confusion among Vetro devotees. As in his first recording, the music reflects the influence of the drummer-composer’s nationality. It also captures a bit of the whimsy that occasionally peeped through the seriousness of the writing for strings on Vetro’s initial CD. Indeed, whimsy abounds in its first track, “Quidi Vidi Ditty,” whose title Vetro says is pronounced, “Kitty Vitty Ditty,” inspired by the name of a village near St. John’s in the province of Newfoundland. The piece opens with Vetro playing the ugly stick, an instrument he says is native to Newfoundland. Here are Vetro and his quartet with Noah Franche-Nolan, piano; Nelson Moneo, and a bassist whose name we have yet to learn.