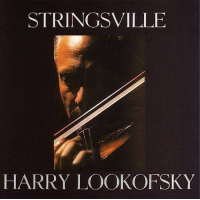 I'm not a big jazz violin guy. No matter how you slice it, the instrument reminds me of the guy in the movies who shows up at lovers' tables in restaurants. For me, the jazz violin is too high-pitched, squeaky and relentlessly annoying. Of course, my personal taste takes nothing away from the swing-era violin masters. To be sure, they are technically marvelous. But I find the violin like trying to enjoy something that belongs someplace else. Like watching guys in baseball uniforms play football or having to use bicycle wheels for a dining table. A great thing but not practical.

My sole exception is Harry Lookofsky. Harry who? Lookofsky was the first and probably the only violinist to unravel the secrets of playing bebop on the instrument. Lookofsky recorded on many jazz albums in string sections but recorded only a few albums under his own name.

The one that stands out is Stringsville for Atlantic in January 1959. Still think I'm stretching? Here are the guys on the date with Lookofsky:  Bob Brookmeyer (v-tb), Hank Jones (p) Paul Chambers (b) and Elvin Jones (d). Stringsville features eight tracks: Moose the Mooch, Dancing on the Grave, Champagne Blues, Little Willie Leaps, Give Me the Simple Life, Move, I Let a Song Go Out of My Heart and 'Round Midnight. Each arrangement is sophisticated, and Lookofsky swings in and out with clean bebop lines. I have two clips for you at the end of this post.

Lookofsky was born in Paducah, Ken., in 1913. He started playing the violin at age  8 and received his training in St. Louis, Missouri. In his early teens he played the vaudeville circuit in the South with a small jazz orchestra. Following his departure from St. Louis in 1938, Lookofsky joined the NBC Symphony Orchestra under Arturo Toscanini (above) and continued his career as a classical symphony violinist, rising to concertmaster at ABC following Toscanini's retirement in 1954.

Lookofsky recorded on many jazz albums as part of the string section and recorded only a few as a leader. He also co-produced the baroque-pop hit Walk Away, Renee in 1966 by The Left Banke, a song that was co-written by his son, Michael Brown, a founding member of the group. Lookofsky also played strings on songs recorded by Stories, his son Michael's later band.

On Stringsville, Lookofsky plays violin, viola and tenor violin. What exactly is a tenor violin? Violinist Jon Rose interviewed Lookofsky and posted about him on his website (go here) prior to Lookofsky's death in 1998.

Here's Lookofsky on the tenor violin:

“I read about this kind of violin in a New York magazine and I went to Wurlitzer and asked the manager if he could get that instrument for me and he did. They were in business with this firm, it was a German Firm in Mittenwald. So they sent away and got it for me. It was like a viola but with much deeper sides and the strings were tuned an octave lower than a violin. It had strings on it that didn't sound so well, so I went to a string maker and he made up a special set for me. They were very thick! The instrument suited my purposes perfectly. I made it sound like a tenor saxophone. I don't have it anymore. Somebody stole that instrument from me."

JazzWax tracks: Harry Lookofsky's Stringsville is available here as a CD and at iTunes as a download.

JazzWax clips: Here's “Give Me the Simple Life,"

And here's “'Round Midnight."