Harris Eisenstadt's "Canada Day IV" Will Be Released On September 4

“With each new release, Canada Day is developing into a more intriguing ensemble as well as an ideal, malleable outlet for Eisenstadt’s distinctive concepts.” --Shaun Brady, Jazz Times 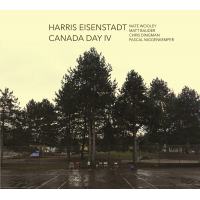 Canada Day III made many Best of 2012 lists. In the meantime, award-winning drummer Harris Eisenstadt launched a new group, Golden State (with two releases on Songlines). Now Canada Day, his his longest-running band, returns with its most accomplished album yet, a thoroughly entertaining, provocative program of original compositions that blends swinging modern jazz and spikier, off- center avant-jazz styles. The band’s idionsyncratic sound world features close percussive/textural interplay between gorgeous vibraphonist Dingman and Eisenstadt, who leads from the kit almost like a modern-day Art Blakey. Frontline soloists Wooley (whom Dave Douglas has called “one of the most interesting and unusual trumpeters living today”) and Bauder (who recently toured for a year with Arcade Fire) play the whole jazz/improv tradition with great verve and character. Pascal Niggenkemper has taken over the bass chair, and the arrangements allow for many more small groupings than before. This eager, quick-witted bunch (highly respected bandleaders all) take full advantage of their opportunities with playing that frequently elicits smiles for its daring and abundant good humor. As Harris says, “I do think we’re at our best when there’s a palpable sense of high-wire negotiation of written and improvised materials happening. There’s a congeniality amongst us that is also palpable. I value that looseness and trust within the group very much. If you’re not enjoying yourselves together, why bother?”

Harris recaps the band’s history and current direction: “Canada Day’s first gig was at pianist Jim Carney’s Konceptions series in Brooklyn on July 1, 2007—Canada Day [Canada’s national holiday]. My original intention—really, what motivated me to move back to New York in 2005/2006 (I lived in New York from 1998- 99 before moving to California for seven years)—was to have a working band. I wanted to find the folks who would work together well, stick with it and develop a group concept incrementally. The group concept has changed over time as I’ve changed over time, but the core principle has remained basically the same: a quintet of standard instrumentation (with vibraphone slightly less traditional than piano would be) that could be a long-term vehicle for a variety of compositional structures and improvisational strategies. For Canada Day IV I wanted to go deeper into the possibilities of solo, duo, trio and quartet spaces within the ensemble. And rather than have stand-alone small group pieces, I decided to incorporate these different pieces into larger wholes, to keep shifting amounts of sonic information, weight and scope. As for my drumming, I continue to draw inspiration from non-drum set rhythm concepts, polyrhythmic traditions of Africa and the Diaspora, and particularly Cuban batá drumming these last five years.”

About Pascal Niggenkemper Harris has this to say: “Pascal is a fantastic interpreter, reader, creative pattern varier, and a very adventurous improviser. Playing grooves with him feels great, as does improvising textures. I would say his playing probably incorporates more extended techniques than the other Canada Day bassists. So he has this really far-reaching creativity plus that intangible thing which everybody loves about a great bassist: he makes the music feel good.”

A few notes on some of the pieces and their titles: “I started writing ‘After Several Snowstorms’ one morning during the winter of 2014 when New York was getting dumped on. The opening bass line (which quickly morphs during the opening tenor solo and returns briefly at the beginning of the full ensemble material) has three groups of two notes… a series of one-two punches. ‘Sometimes It’s Hard to Get Dressed in the Morning’ and ‘Let’s Say It Comes in Waves’ both reference our son Owen, and the challenges of parenting. ‘Life’s Hurtling Passage Onward,’ ‘What Can be the Set to the Side’ and ‘What’s Equal to What’ all come from the same Richard Ford passage that ‘The Arrangement of Unequal Things,’ the first track on Golden State II, came from. ‘Meli Melo’ is actually the French name for a Canadian snack mix called (in English) Bits and Bites. I started writing the book for Canada Day IV with a bunch of short pieces—some of which became duet pieces within longer structures, and two that ended up making up this last piece on the record—and they all had the title ‘Bits and Bites’ with numbers assigned to them. As I tried to find a title for these last two parts that came together as one piece, for some reason an image of the red bag with Bits and Bites on one side and Meli Melo on the other came into my mind. Shreddies, peanuts, pretzels, and cheese crackers all mixed up together and over-salted. A little Canadian nostalgia, I guess.”

Canada Day IV will next perform as part of Eisenstadt’s residency at The Stone from September 1-6.