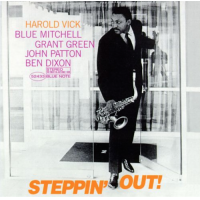 slideshow
To pay the bills and gain experience in the 1950s, a surprising number of jazz saxophonists began their careers in R&B bands. The list is too long to run out here but it includes John Coltrane, Benny Golson, Stanley Turrentine, Hank Crawford and Tina Brooks. There certainly was plenty of work at urban bars in African-American neighborhoods and all along the so-called Chitlin' Circuit—the archipelago of clubs between the East Coast and Midwest that hired such instrumental groups.

One of the most talented and soulful saxophonist-composers who came up through R&B was Harold Vick. Born in Rocky Mountain, N.C., in 1936, Vick began playing in his high school band before attending Howard University in Washington, D.C., as a psychology major. By his junior year, he was hired by Rick Henderson, who led the house band at the Howard Theatre. The house band backed all sorts of artists, which required Vick to be a versatile player.

Vick graduated college in 1958 and began working in R&B bands. He soon moved to New York and worked briefly with trumpeter Howard McGhee and drummer Philly Joe Jones. Then he teamed with organist Brother Jack McDuff (above) in 1960. Prestige Records had begun recording organ-sax combos in an effort to keep up with Blue Note's Jimmy Smith and Big John Patton. Vick recorded five albums for Prestige with McDuff between 1961 and '63, and then joined Patton at Blue note on Along Came John.

In May 1963, Vick recorded his first leadership album—the superb Steppin' Out, with Blue Mitchell (tp), Patton (org), Grant Green (g) and Ben Dixon (d). The album remains a gorgeous example of early soul-jazz that came with a gospel-blues feel. Patton had a locomotive attack at the organ, Mitchell added a bright jazz vernacular to the session and Green provided a swinging, pecking groove. As for Vick, he had a big bossy sound akin to Turrentine's, though Vick's horn had a bit more bark and bite.

Steppin' Out is one of those albums where every track is superbly smart and loaded with blues energy and daring. Best of all, five of the six album tracks were Vick originals. It turns out Vick was a marvelous composer who could write deep blues and hard-bop hard-chargers. My favorite is the driving Dotty's Dream, which lets each artist exhibit their specialty. Long forgotten, this album is a gem. [Photo above of Big John Patton]

Harold Vick died in 1987 of a heart attack at age 51. No wonder Sonny Rollins wrote and recorded Did You See Harold Vick? in 2000.

JazzWax tracks: Harold Vick's Steppin' Out appears to be out of print and selling for $41 here. The price is hight at eBay. Sadly, it's not available at iTunes or Spotify.