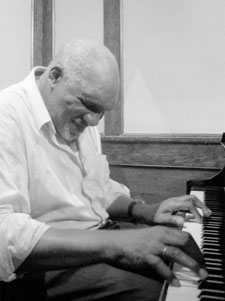 slideshow
Harold Mabern, a pianist who came relatively late to prominence but quickly carved out space as a hard-bop and soul-jazz legend, died September 17. He was 83.

Born in Memphis, Tenn., Mabern was self-taught and came under the sway of local jazz pianist Phineas Newborn Jr. In 1954 he moved to Chicago, where he began recording with saxophonist Frank Strozier. He also was friend with Memphis saxophonists George Coleman and Booker Little. After moving to New York in 1959, Mabern recorded as a sideman for a range of artists.

His significant recording period began in 1962, when he recorded with Art Farmer and Benny Golson's Jazztet (The Jazztet: Here and Now). A turning point came in 1965, when he recorded with Freddie Hubbard (studio), Wes Montgomery (live), Sonny Stitt (studio) and then a series of monumental recordings with Hank Mobley (Dippin'), Lee Morgan (The Gigolo), Jackie McLean (Consequence) and Blue Mitchell (Bring It Home to Me).

In 1968, he began an exceptional career as a leader with A Few Miles From Memphis, with saxophonists George Coleman and Buddy Terry. Over the years, his albums leaned toward an elegant form of soul-jazz, unleashing grooves with a gentle funk. In the decades that followed, his solo albums took on a richer quality as he opened songs with the same type of mystery used by Erroll Garner, who left his bassist and drummer guessing until the last second.

Here are 10 of my favorite tracks by Harold Mabern that will serve as entry points to his discography:

Here's Mabern with Lee Morgan from The Gigolo, from the album of the same name...

Here's Mabern's Greasy Kid Stuff from the album of the same name, with trumpeter Lee Morgan and Hubert Laws on tenor saxophone...

Here's Mabern on the title track to Pisces Calling...

And here's Mabern with Montgomery in 1965 playing John Coltrane's Impressions...