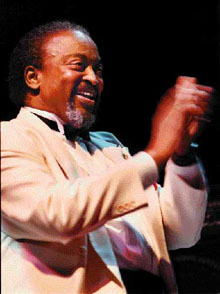 slideshow
Pianist Gene Harris (1933-2000) recorded prolifically during his long career. He started out playing in Army bands during the early 1950s. In 1956, he formed The Three Sounds with Andy Simpkins on bass and Bill Dowdy on drums. (Actually, it was originally The Four Sounds, but saxophonist Lonnie “The Sound" Walker dropped out after a year.) The group recorded exclusively with Blue Note Records from 1958 to 1962, including LPs with the likes of Lou Donaldson and Stanley Turrentine (the quietly grooving Blue Hour). Harris had a very warm, rich-bodied sound to his playing, very bluesy with a gospel tinge, a style that epitomized Blue Note's soul-jazz of the period.

The Three Sounds continued recording through the 1960s with Verve, Mercury, and Limelight up until the group disbanded in 1973. Harris was in effect retired in the late 1970s, although he played locally to his home in Boise, Idaho. He returned to touring and playing in the 1980s after Ray Brown convinced him to join his trio. He recorded with Brown and as a leader until his death from kidney failure.

One of my favorite Gene Harris performances is a Ray Brown LP called Summer Wind (Concord, 1988), a recording of a live date at Santa Monica's Loa Club. Here, Harris is featured on several numbers, including terrific versions of “Li'l Darlin'" and “Can't Help Lovin' Dat Man" (from the Broadway classic Show Boat). Here is the same lineup, with the addition of Herb Ellis on guitar, performing “Oh, Lady Be Good" during an appearance in Berlin in 1989.

This story appears courtesy of Riffs on Jazz by John Anderson.
Copyright © 2020. All rights reserved.