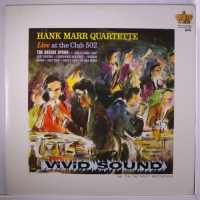 The Hammond organ's steady rise in popularity during the 1950s had everything to do with economics and efficiency. Early in the decade, new organ models became increasingly compact and more affordable, allowing artists to transport them and clubs to purchase one and store it in a corner. Organists were especially profitable for smaller clubs, since the keyboard could be set to sound like a wide range of instruments. Instead of hiring a combo with a horn section, a club needed only an organist and one or two other musicians to sound just as full. What's more, a good organist could handle the bass line with his or her feet working the pedals. Inadvertently, organists put a lot of musicians out of work.

Among the many versatile organists who performed the Midwest club circuit was Hank Marr. Throughout the 1950s and into the '60s, Marr toured and recorded with tenor saxophonist Rusty Bryant. By the mid-'50s, Marr was often recording singles at King in Cincinnati and touring neighboring cities. In Columbus, Marr played often at Club 502, a major jazz venue from 1957 to 1968 at 502 St. Clair Ave. Marty Mellman took over the club in 1961 after a fire damaged the establishment and destroyed Milt Buckner's organ.

In December 1963, Marr recorded at Club 502 with Rusty Bryant (ts), Wilbert Longmire (g) and Taylor Orr (d). Their set was taped by King Records and released as The Hank Marr Quartette: Live at Club 502. As Gene Redd, King's head of A&R, wrote in the album's liner notes, “This is a lot of sound and a lot of music for four men." The tracks are Marr's hit single Greasy Spoon, One O'Clock Jump, Marr's Easy Talk, Longmire's Freedom March, Just Friends, Hank's Idea, I Remember New York, and Marr and Redd's Up and Down.

Marr had a tough, soulful sound on the organ that surely influenced organist Charles Earland. Bryant's big, insistent tone on the tenor saxophone shared much with Stanley Turrentine's sound and was perfectly suited to Marr's bossy attack. Best of all, the soul-jazz energy on this album recorded at the tail end of 1963 provides a snapshot of the organ's prowess in the Midwest.

JazzWax tracks: The Hank Marr Quartette: Live at Club 502 has never been released on CD or as a digital download. I'm not sure who owns the King catalogue these days but someone should re-issue this one. You can find the album on vinyl at eBay for around $75.