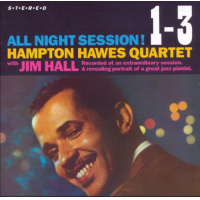 slideshow
I've never been a huge fan of pianist Hampton Hawes. His keyboard assault on many leadership trio albums are frantic and more concerned with speed and percussive impact than harnessed intensity. The result is a jarring listen followed by a headache. Dazzling jazz pianists who skillfully held their emotional horses include Art Tatum, Bud Powell, Al Haig, Erroll Garner and Billy Taylor, to name just a few. The burner under Hawes's proverbial pan was up way too high when he recorded with bass and drums.

Interestingly, the exception is when Hawes led a quartet that included a guitar. Yesterday I spent more than 12 hours listening to most of Hawes's albums. His best recordings, by far, were the three-volume All Night Session albums recorded on November 12 and 13, 1956. This live studio date for Pacific Jazz featured Hawes (p), Jim Hall (g), Red Mitchell (b) and Bruz Freeman (d).

For some reason, when the guitar was along for the ride, Hawes was kept in check, with the guitar serving as an instrumental pace car. With the guitar, Hawes had to listen and remain in sync with another lead player. Another example of a flawless Hawes quartet album is Four!, with Hawes (p), Barney Kessell (g), Red Mitchell (b) and Shelly Manne (d).

Of course, Hawes also was superb as a sideman, especially when in the mix on albums led by Art Pepper, Shorty Rogers, Warne Marsh, Lennie Niehaus and Curtis Fuller. Unfortunately, Hawes only led quartet recordings with the guitar twice—the two just mentioned. The only other example featured two tracks on guitarists John Ashby and John Collins' Guitar Players in 1976, recorded just months before Hawes's death in 1977 at age 48.

The All Night Session was a stunning achievement and remains a landmark recording. Though the three volumes have been largely forgotten today, the albums remain a solid entry to jazz and evidence of why jazz is so exceptional. So why were these albums called All Night Session? From Arnold Shaw's liner notes in 1958:

“As a group, the three albums and sixteen selections comprising All Night Session represent a most unusual achievement in the annals of jazz recordings. The almost two hours of music were recorded at a single continuous session in the order in which you hear the numbers and without editing of any kind. This seems like an impossible feat. Playing steadily for several hours is a taxing physical experience at best, but improvising continually for that length of time is an exhausting one, mentally and emotionally. Yet the later selections in All Night Session reveal no flagging of spontaneity or inventiveness."

Actually, Shaw's notes are a little deceptive. For one, Hawes wrote in his autobiography, Raise Up Off Me: A Portrait of Hampton Hawes, “I got together a quartet, using Jim Hall on guitar. We recorded twelve tracks in one continuous session from 9 at night to 8:30 the next morning." Clearly there were alternate takes or lengthy breaks, since 11 1/2 hours in the studio was needed to record two hours of music. For another, Hawes's drug addiction during this period left him “in bad shape" by his own admission. Which means he was likely using during the session. This, of course, leads one to jump to another conclusion—that the reason for the All Night Session was because Hawes needed cash. He may have suggested he give Pacific Jazz enough music for three albums all at once for three cash paydays up front.

No matter how you slice this marathon session, it remains one of the finest recordings in jazz history. Not only are the three albums perfect in every way, the set is an exemplary collaboration between two jazz giants—Hawes and Jim Hall. If all I could do was listen to this set for a week straight, I'd be fine with that.

JazzWax tracks: You'll find all three All Night Session albums together in sets here and here.

It looks like just Volume 1 is available at Spotify.