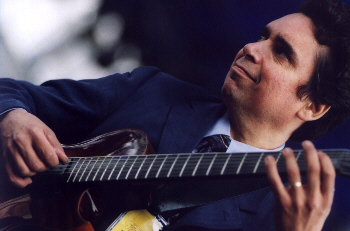 Recognized by Down Beat in 2008 as one of 75 top jazz guitarists, Arbors and Concord recording artist Howard Alden is known for playing guitar for Sean Penn as the Django-like character Emmet Ray in Woody Allen’s Sweet and Lowdown.

The Jean Goldkette Orchestra out of Detroit featured some of the best hot players of the 1920s—Bix Beiderbecke, Frankie Trumbauer, Joe Venuti, and Eddie Lang on guitar. Like many a jazz band in the early days of radio, the Goldkette Orchestra gained a following through the new medium of live remote radio broadcasts from their home turf, the legendary Greystone Ballroom.

But in the years before the electric microphone, hot jazz bands playing in large, crowded dance halls preferred the penetrating sound of the banjo to cut through the boisterous, hell-bent-for-leather front line—to lay down the driving pulse of hot jazz. But by the 1930s, after microphones came into widespread use in live situations, the guitar made a comeback—especially after everyone heard the great virtuosity of Eddie Lang on radio.

In his short nine-year career Lang and his partner, violinist Joe Venuti, made hundreds of popular recordings with bands led by Paul Whiteman, King Oliver and Jean Goldkette, and with numerous vocalists—especially Bing Crosby. Marty Grosz says, “He was just an all-around guy who could do anything you could think of on the guitar.”

On our show this week, Howard Alden demonstrates the styles of guitar soloing that Lang pioneered, combining Bix-like single-note melodies, chording melodies, and stride piano-like bass lines. It’s important to note that Lang had invented these styles a full decade before the rise of Django Reinhardt in Europe and the even later emergence of Charlie Christian as a single-note-style innovator of the early Bebop movement in Harlem.

Carl Kress shares credit for launching the guitar as a jazz instrument. He was among the first to trade in his banjo for a six-string guitar. Given his reputation for innovation, others soon followed suit.

Kress developed a style of playing chorded solos using a wider-interval string tuning of his own invention. In the 1930s Kress teamed up with Dick McDonough, who used the standard guitar tuning. Their duo made possible a wider range of notes, expanding the palette of guitar music. On our show this week, Marty Grosz, who uses a tuning similar to that of Kress—and Howard Alden, who plays the standard tuning— team up to bring this unique ‘orchestral’ sound to life with a classic Kress/McDonough set-piece “Stage Fright.”

Kress had a second career in the ’30s, running the Onyx Club on New York’s 52nd Street. In the 1940s he produced hits for Capitol Records. But it was his widely-heard duets with Eddie Lang—and later Dick McDonough—that secured Carl Kress a lasting place in jazz history.

Lonnie Johnson is recognized as the first blues guitarist to cross over to jazz. Born in New Orleans, as a young man he roamed the South playing in clubs and bars in Texas. When the great flu epidemic wiped out his family, he headed north to St. Louis. He won a talent contest there and was awarded a seven-year contract with Okeh Records, appearing on records with Duke Ellington and Louis Armstrong’s Hot Five. In a career spanning some 40 years, he made more than 500 recordings. Like Eddie Lang, Johnson based his style on single-note melodies.

In the 1960s Lonnie Johnson was working as a hotel janitor when a Philadelphia DJ rediscovered him and revived his career. Among Johnson’s most highly-regarded recordings are his guitar duets with Eddie Lang masquerading as “Blind Willie Dunn.” Marty Grosz recalls:

“I met Lonnie Johnson about thirty years ago in Toronto. We were both on a radio interview show and I had expected him to look like a blues guitarist is expected to look, I guess, sort of ragged and everything, quite the antithesis. He was very sharp. He had a three-piece suit on and he had yellow pointed shoes and looked very prosperous, in fact he was doing quite well, he had been rediscovered after going through many different kinds of careers and he was doing OK, and he talked about, very lovingly, the duets that he recorded on Okeh Records with the great Eddie Lang.”

After Lang, Kress, Johnson and others showed everyone the great range and possibility of the guitar in jazz band and duo settings, banjo players began to take up the guitar. The tenor banjo is tuned in fifths, as is the mandolin, violin, viola and cello. This meant that aspiring guitarists who had started out on a fifth-tuned banjo had to re-learn all of their scales and chords for the guitar, which normally is tuned mainly in fourths.

A short-cut solution to this dilemma was the tenor guitar, which uses four strings instead of the standard six, and can be tuned like a tenor or plectrum banjo, thus enabling the aspiring guitarist to use the banjo fingerings he already knew.

Just such a banjo-turned-guitarist was the young Chicagoan Eddie Condon, who took up the tenor guitar tuned as a plectrum banjo—pitched lower than the tenor banjo. Condon went on to spearhead the lively “Chicago-style” jazz movement in his New York night clubs and touring bands until 1971. On our show this week, Jim Cullum Jazz Band guitarist Howard Elkins—who plays a vintage tenor guitar tuned in fifths—performs one of Condon’s best-known original tunes, “Liza.”

Django Reinhardt was the first European to influence American jazz musicians. Howard Alden describes how the Paris-based Gypsy came to know the work of the Americans.

“There was kind of an informal group of guys that used to get together in France, just to listen to records, called the Hot Club of France. They’d get the latest jazz records of Louis Armstrong, Duke Ellington, Sidney Bechet…some of the records they heard were from Eddie Lang and Joe Venuti, and that encouraged Django to get together with violinist Stephane Grappelli…they decided they wanted to try and emulate those guitar and violin duets but play their own things in their own style.”