Now released on May 29th, the album is comprised of seven tracks of mostly original material ranging in styles as varied as modern jazz, fusion, avant-garde and americana/country, often even in the same songs. 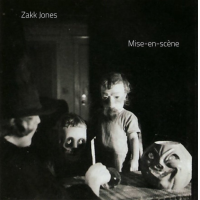 slideshow
In early 2019 Zakk Jones and his trio recorded their debut album Mise-en-scène at Musicol, one of the oldest studios in the Mid-Ohio region. Now released on May 29th, the album is comprised of seven tracks of mostly original material ranging in styles as varied as modern jazz, fusion, avant-garde and americana/country, often even in the same songs. Mixed by Grammy- Awarding winning engineer Rob Griffin in Panama, who has worked closely with such artists as Wayne Shorter, Pat Metheny, Julian Lage, Michael Hedges and many others.

Mise-en-scène is a French film expression, used to describe the physical setting of a scene. Everything from the set, props, actors, costumes, lighting and more can lend itself to the shot. More broadly, it can be thought of as a work of arts overarching ambience and aesthetic. Musically Zakk has established his own Mise-en-scène by drawing from his myriad influences and creating something equally undefinable yet familiar sounding.

“I decided that 2019 would be the year to showcase what my own trio has been working on. We’ve been playing in many situations for years now, and since focusing on our collective sound we've crossed into some equally beautiful, introspective, aggressive and downright wild territory at times. I don't really feel the need or pressure to put any labels on it, but I'd probably say it lives in some warped parallel universe where jazz, americana, folk, fusion, avant-garde and the grotesque all met and had a party “

Zakk Jones has been a fixture of the Columbus, Ohio scene, playing with such artists/bands as Doc Robinson, Popgun, Safety Squad and legendary organist Tony Monaco. Using his many years of professional experiences, this project is truly a culmination of his deep command and love for all styles of music. With material ranging from modern jazz, to a light waltz, to a solo guitar ballad and even a country/rock excursion, this record has something for everyone to sit back and enjoy listening to. Joined by bassist John Philip Allen, and drummer Ryan Folger, this is a trio that clearly plays from the heart in support of each other.

Mise-en-scène has been met with support and praise from industry-professionals and publications like JazzColumbus.com, The Sounds of Bustown, Jazz Guitar Today, All About Jazz, the Greater Columbus Arts Council and more. Zakk can be seen in the Midwest and beyond, with upcoming engagements at the Bar Next Door (NYC), Bop Stop (Cleveland), Schwartz's Point Jazz & Acoustic Club (Cincinnati), Arts + Literature Laboratory (Madison) and the 1st annual Rocky Mounty Archtop Festival in Denver.

The album is available everywhere digitally, with CD’s and limited-edition vinyl being pressed soon. Reserve your copies today!