SOURCE: WOLFGANG SCHALK
May 9, 2013
Sign in to view read count 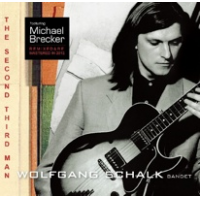 The collaboration with Michael Brecker was a dream come true.

By 1996 standards, the compositions and performances on Wolfgang Schalkʼs The Second Third Man were impressive. The title cut stood out, as I wrote previously: “The Second Third Man" is indicative of the whole album. It is improvised music of originality and high performance. Schalk and Michael Brecker are perfect foils as they tackle a complicated and relentless head arrangement. The momentum generated makes it sound as if the melody were spring-wound.”

The music on The Second Third Man is an amalgam of electric-jazz, progressive and modern jazz traditions and melodic invention showcased in the boundary-less dimension of free expression and interplay. Gritty and hard-charging grooves easily flow into lyrical beauty and out again. Schalkʼs compositions are structured, but spatial, and their interpretations give clear evidence of the stimulating band chemistry that took place during the recording sessions.

The original release didnʼt really receive proper marketing. In addition, Schalk never was really happy with the sound. “The final mix wasnʼt like what I heard in the studio.” Luckily, the original session tapes had been saved. When Schalk started his own label, Frame Up Music, and gained all ownership rights to the albumʼs music, he saw it as a great opportunity to remix the album.

The brand new remix of The Second Third Man affirms Schalkʼs standing as a creative composer and major modern guitar voice. Like Pat Metheny, Schalkʼs main influence was Wes Montgomery. You can hear some similarities between Schalk and Metheny, but both have taken what they have learned from Montgomery and put it into their own bags.

In addition to Breckerʼs star turn, Schalk was joined on the album by his talented mid-nineties working band, Florian Brambock on tenor and soprano sax, Paul Urbanek on piano & keys, Werner Feldgrill on bass, Herbert Reisinger on drums and guest Peter Herbert on acoustic bass.

The Austrian native Wolfgang Schalk moved to New York City in 1997 to “follow his mission” of music. Jazz was, after all, an American art form. After 10 years on the East Coast, Schalk relocated to Los Angeles, (he kept his loft in Hoboken, NJ), and goes back and forth between the coasts.

Currently, the bi-coastal jazz guitarist is promoting his most recent recording, Word of Ear, of which Mark F. Turner of All About Jazz says is an album that is “...strong and modern post-bop vibe chops a la Pat Martino ...a mix of adrenaline...picturesque balladry...refreshing...”

Walter Kolosky is the author of Power, Passion and Beauty - The Story of the Legendary Mahavishnu Orchestra.