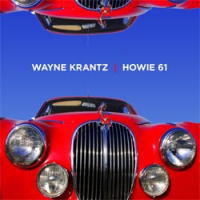 slideshow
Howie 61 is due out on April 17th on Abstract Logix Celebrating with five night stint at the Iridium Nightclub in NYC.

The title, Howie 61, refers to Bob Dylan’s 1965 song, Highway 61 Revisited, an iconic blend of blues-based rock n’ roll riffs. Krantz sends a respectful nod to the musical great through the new format of his latest effort. The result is another step forward for Krantz—a striking album that melds his group improvisation and compositional approaches. Now, Krantz has re-invented himself, yet again, with a stunningly creative recording, and a bold new direction. Highlights include such rocking tracks as “The Bad Guys” and “Can’t Stand To Rock”—both high energy tracks propelled by Krantz’s searing guitar work. On the tongue-in-cheek “U Strip It,” David Binney, a frequent Krantz collaborator, delivers a smoldering sax solo over a playful, driving groove.

Krantz continues to push his artistry even a step further by blending new vocal content into his music; a method more complete and tightly integrated says Krantz, then any of his earlier vocal efforts. “It’s another step in a direction I’ve been making since Long To Be Loose”, he explains. On whether this is the pinnacle of his long career, Krantz says, “This record is not the completion of that journey at all, but it is a step in the direction that’s been in my head now for a really long time.”

Just prior to the album release, Krantz will be joined by a group of friends for a 5-night stint at the famed NYC Iridium Nightclub. The first night will see Krantz join the Les Paul Trio for a special start to the week. Over the next two nights, he will be joined by Cliff Almond on drums, “Cliff has been playing with me in various bands for years and he played on my record, Your Basic Live ’06”; jazz star Chris Potter, on saxophone, who, Krantz toured and recorded with in the band “Underground”. Finally, there is Anthony Tidd on bass who Krantz describes as “the new face for these nights. He’s played with sax legend Steve Coleman as well as producing here and in London.”

For the last two nights, Krantz will be joined by his longtime trio; Keith Carlock (Steely Dan, John Mayer), drums, and Tim Lefebvre (Chris Botti), bass, who held a weekly residency at the 55 Bar in NYC for the last six years. Together, they’ve toured around the world and recorded on Krantz’s last three records.