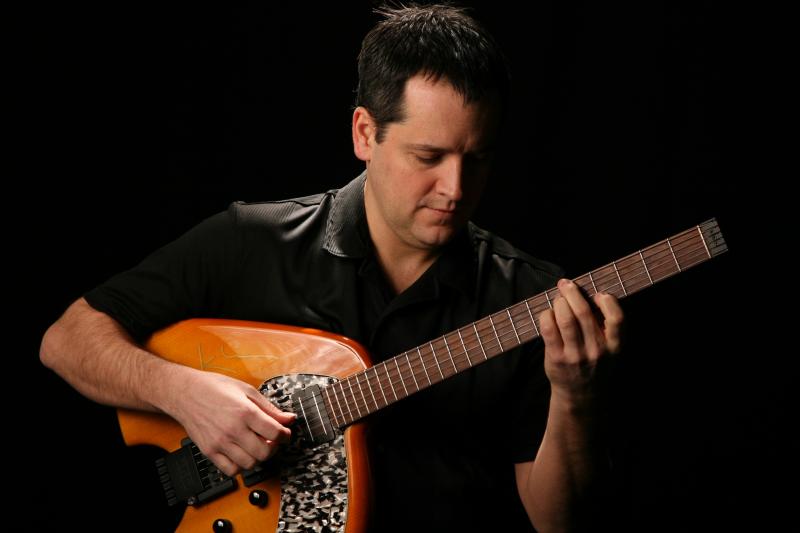 Scheduled for May release on Harvest Time Records

For the past decade, guitarist Tom Lagana has been quietly carving out a niche on the D.C.-Baltimore-Annapolis jazz scene, with occasional forays into Richmond, Virginia and Philadelphia. On Schematic, the 40-year-old protg of guitarist Charlie Byrd makes a strikingly original statement with a potent rhythm tandem of drummer Todd Harrison and bassist Tom Baldwin along with special guests George Garzone on tenor sax and trumpeter Dave Ballou. “This is the blueprint for what I want the band to sound like," says Lagana of his impressive sophomore outing and debut for the Harvest Time label.

As a follow-up to 2002's Patuxent, Lagana's latest has him stretching out more authoritatively and finding his own voice. “In that first record, I was getting my feet wet," he says. “If you listen to it and then listen to this new record, I think you'd believe there were two different players. I was trying to be Pat Metheny on that first record. And though he was a huge influence on me, I feel like I've got more of my own thing going on Schematic."

From his rhythmically inventive take on the jazz standard “All Or Nothing At All" to a letter-perfect reading of the challenging Thelonious Monk number “Evidence" (featuring a powerhouse drums-tenor sax breakdown between Harrison and Garzone) to a sublime rendition of Bill Evans' gorgeous “Re: Person I Knew," Lagana and company show their deep understanding and reverence for the tradition while putting a fresh spin on those jazz staples. In the guitarist's original material, he stakes out more personal territory. The urgent title track is a prime example of the Lagana in unbridled free bop mode. The gentle nylon string acoustic offering “Lauren's Song" showcases a wholly different aspect of his musicality while “W.W.H.D." is pure boppish burn based on the changes to “I Got Rhythm" and featuring a potent tenor solo from Garzone. The restful “There Are Three" is a poignant piece written for his wife Jennifer and daughters Marina and Annabelle, The funky “Dents" is an infectious blowing vehicle constructed over a go-go beat while the ECM-esque closer “Hidden 5th" has him gliding elegantly over the changes in waltz-time fashion.

Jazz critic James Scott calls Lagana “a fresh and revitalizing voice in the world of contemporary jazz guitar,"and predicts this release will capture both critical and commercial acclaim.

After graduating in 1992 from the prestigious Berklee College of Music in Boston, where he was influenced by guitarists Jon Damian and Al Defino. Lagana began his professional career as a musician in the Walt Disney Jazz Band. Upon Lagana's return to Maryland in 1994, jazz legend Charlie Byrd took an interest in him and invited him to sit in on his regular gig at the Maryland Inn. Later that same year, The Tom Lagana Group became the house band at Byrd's venue of choice, The King of France Tavern in Annapolis. The group played there three nights a week for over a year. In early 2002, Lagana released his first recording as a leader. Patuxent, peaked at No. 17 in the US jazz charts.

Throughout his career Lagana has played numerous festivals including the Chestertown Jazz Festival, Oregon Ridge, Annapolis Jazz Festival, The Mid Atlantic Wine Festival, Federal Hill Festival, and the Kaufmann Music Series. He has shared the bill with international jazz icon Herbie Hancock and has worked with such noteworthy musicians as Red Rodney, Craig Handy, Bob Mintzer, and Marvin Stamm. His guitar work can also be heard on the Fox Network show America's Most Wanted.

As a classical guitarist, Lagana (pictured below; L to R bassist Tom Baldwin, drummer Todd Harrison, guitarist Tom Lagana, saxophonist George Garzone) was a guest artist at the First World Guitar Congress in June 2004 at Towson University. He played bandurria with the Rondalla de Hunt Valley and participated in master classes with Ralph Towner, Dusan Bogdanovic, The Los Angeles Guitar Quartet, and the Brazilian Guitar Quartet. In 2005, he was invited to the Long Island Guitar Festival to perform for classical guitarist/composer Carlo Domeniconi. That same year, he earned a master of music in performance degree from Towson University. While at Towson, Lagana was awarded second prize in the prestigious Sidney Lieberman Competition. Normally won by pianists, Lagana was the first guitarist to be recognized in the history of the competition. Later in 2005 Lagana became an instructor at the University of Maryland Baltimore County. In 2007 he joined the faculty at Towson University.

As an author, Lagana's in-depth analysis of the music of Pat Metheny was published in two parts (August 2005 and November 2005) issues of Just Jazz Guitar magazine and was endorsed by Metheny himself. In 2008 Lagana was featured with the National Symphony Orchestra at the Kennedy Center in Washington D.C. and the Wolf Trap National Park for the Performing Arts in Vienna, VA. Composer David Del Tredici lauded Lagana's performance on the tenor banjo in Del Tredici's work Final Alice, a 72-minute piece based on the composer's affinity for Alice In Wonderland. Lagana recently performed with the York Symphony, Richmond Symphony and National Symphony Orchestra.

Judging from the quality of Schematic, versatile guitarist/composer Tom Lagana will be on the radar for some time. An inspired outing with absolutely no filler from start to finish, Schematicis the Tom Lagana album to make guitar aficionados and the jazz world in general sit up and take notice of talent deserving of wider recognition.

Sunday, May 16 - Wine in the Woods at Noon, Symphony Woods, Columbia, Maryland

Saturday, May 22 - An die Musik, Baltimore, Maryland (with George Garzone)