Very fine orchestral score (cello / piano-heavy) that is just lovely and able to stand alone as a record and not just a film score. Poignant… beautiful. I really liked this score!
—Thom Carnell 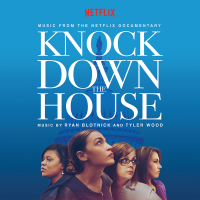 Guitarist Ryan Blotnick’s work has been widely praised by critics, from Nate Chinen of the NY Times, who said of his 2012 Release, Solo, Volume 1, “He's not afraid of starkness or silence, and he knows how to spin a good yarn. He’s a natural...” to Time Out New York, which lauded Music Needs You (2008), saying “A record full of memorable melodies; gentle, reflective tunes [that] might actually have a shot at becoming 21st-century standards. Blotnick’s nods to moody rock and ethereal free jazz peg the 24-year-old bandleader as a vital contemporary voice.”

In 2018, Ryan was approached by his brother Robin and sister-in-law Rachel Lears to work on the score for Knock Down the House, a documentary that they were filming that revolved around the primary campaigns of four progressive Democrats, Alexandria Ocasio-Cortez, Amy Vilela, Cori Bush, and Paula Jean Swearengin, who ran for Congress in the 2018 midterm elections.

From the beginning, Ryan, Robin and Rachel had agreed that the music that would best serve the message of the film would have a live chamber group sound, with traditional and modern elements. Ryan began composing demos in his Maine studio and, with nearly constant feedback from Robin and Rachel (who is a serious musician in her own right), eventually homed in on a palette of strings, clarinets, guitars, pads and keyboards with no drums or percussion. Since the film is about insurgent candidates learning how to compete on-the-fly in a bewildering political arena, they wanted the score to reflect this feeling of volatility and spontaneity.

“I think that there is a very fine line in film scoring between supporting and manipulating,” says Ryan. “There are a lot of moments where the footage is so good that you can really feel like you are there without the need for any score music. It is hard to capture those moments, but Rachel put in the time to allow the candidates to get comfortable around her, and that paid off, so it’s a very subtle thing when the music comes in – a couple of chords here and there but mostly texture and space.”

During the mixing of his 2016 album, Kush, Ryan had formed a tight musical bond with producer/engineer/composer Tyler Wood (Glass Ghost, Joan as Police Woman) and knew he wanted to collaborate with him on the project. Working under a very tight deadline once the film was accepted to the Sundance Film Festival, Ryan and Tyler organized some live sessions, recording all the strings and piano in a single day at NRS Recording. They recorded clarinet, Fender Rhodes, Moog and guitar over the next few days at Tyler’s Sauce Farm Studio.

Speaking about how a soundtrack album like this evolves from a score, Ryan explains, “In a film, most of the score music fits underneath a lot of dialogue and ambient noise, so it designed to stay out of the way. When Tyler and I listened to the tracks on their own, some felt like they had lost a bit of momentum because all of that talking and noise is almost like its own percussive texture. So, on some of the more rhythmic tracks, like “Brand New Congress,” we added some shakers and the like to fill it out a bit. Other cues were so short that they just didn’t stand alone—we either cut them from the album or lengthened them.”

In addition to Ryan on guitar, bass, synthesizer, sampler and percussion and Tyler on piano, keyboards, synthesizers and percussion, the soundtrack features Sam Sadigursky on clarinet and bass clarinet, Jonathan Talbot on violin, Scott Petito on contrabass and Chris Bear on drums. The score features two extraordinary cellists with very different styles- Jane Scarpantoni was part of Hoboken’s underground rock scene in the '80s and '90s, playing with R.E.M., Bruce Springsteen, the Lounge Lizards, and was Lou Reed’s musical director; Garo Yellin has played with They Might Be Giants, Bon Jovi, Allen Ginsberg, and David Byrne. Sam Sadigursky, who played clarinet and bass clarinet on the score, is an acclaimed jazz composer and played with Garo in the pit band for the Tony Award Winning Musical the Band’s Visit.

The film, which premiered on Netflix in May of this year, has earned strong reviews from the likes of Rolling Stone magazine, CNN, The New York Times, and the Los Angeles Times. The soundtrack album is a fresh-sounding combination of rollicking tracks and dark ambient moods that bring back the emotional weight of this powerful and timely story.