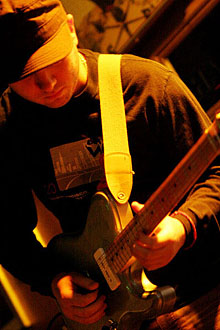 History may be written by the winners, but it can be rewritten by anyone courageous enough to speak truth to power. Guitarist Ross Hammond‘s new record, Humanity Suite, on Prescott Recordings, is a powerful statement, both musically and historically, taking its starting point from Kara Walker‘s truth-telling artwork. It’s also a follow-up to his well- received 2013 album Cathedrals.

In 2013, Hammond was offered a chance to play an October show at the Crocker Art Museum, the premier art museum in Sacramento, California. The performance was scheduled to coincide with an exhibition of Walker’s work. “I thought if I’m going to play for it I’ll compose music for it,” Hammond said.

He was familiar with Walker’s artwork: “Her work is incredible. Very moving and challenging. We look at her work and we realize our past is messed up. For example, she has a series based on old graphics from Harper’s. She’ll take these old pictures of the railroads being built, or the Civil War, something where Harper’s is telling one story, and she’ll superimpose one of her silhouettes on top of the Harper’s piece to tell a different, untold story.”

Although Hammond knew he’d be playing at an exhibit of Walker’s work, he didn’t know the specific pieces that would be on display. “I thought of it more like doing a film soundtrack or a longer narrative,” said Hammond. “It wasn’t, ‘this song goes with this piece.’ I was dealing with an overarching theme. Doing it that way was really cool because it felt like it flowed very easily for me.”

“I wanted to write for six pieces and I wanted it to feature a lot of improvisation,” he said, “but I wanted there to be themes through the piece that we’d revisit. And I wanted there to be improvised counterpoint throughout the piece. The rhythm section lives here in Sacramento and we were able to rehearse. Then the horns came in over that. So in that sense it was very improvised. They had a framework, but they didn’t have to learn bebop lines or anything like that. I knew who the musicians were and what they could do, so I wrote with them in mind.”

The suite is full of Hammond’s trademark fiery playing, joined at every turn by the three outstanding horn soloists, and driven forward by the battery of Kashiwagi and Compise. Hammond has immense respect for each of his bandmates, noting in particular the mentorship of Golia. “Vinny is one of my heroes in terms of how he plays and presents the music. I couldn’t be happier that he was there. And he shreds on the suite.”

Humanity Suite is now available in two formats: on vinyl and as a digital download. Hammond said he choice vinyl both for the warmth of the sound and for the beauty of the packaging. The album features a cover by NSAA that calls back many classic jazz album covers, particularly from the 1970s.

Ross Hammond’s Humanity Suite follows in the tradition of other jazz albums of social commentary (think Max Roach & Abbey Lincoln’s We Insist or Sonny Rollins’ Freedom Suite). And it offers continued evidence that music, in the right hands, can be a powerful tool for progress.