The single, "African Heartbeat' released by Mark Haskins in February of 2018 is an unorthodox composition. The varying rhythmic patterns and pulsating bass lines capture the very essence of Africa. 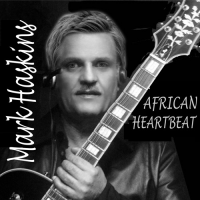 slideshow
Passion is something that some would argue is ingrained in us from those around us. That could very well be the truth when speaking about Mark Haskins and music.

Encouraged by his late father who was a violinist, he was inspired by the sounds of Wes Montgomery and Miles Davis. At the tender age of seven; he became a pint-sized piano man. Mark, who after graduating as an electronics engineer, went on to further his music studies (jazz), at the Trinity College of Music in London. It was there that he took that childhood love of the greats and channelled them as he grew into his own modern day Jazz artist. Now an artist with almost four decades of experience behind him, he's built up an impressive resume of accomplishments. From playing around the world, touring with countless artists, to being on the bill of major Jazz festivals, to being featured on BBC—-he's done it all and then some. He has also worked as a session/studio musician in London, Ireland, France, America and Australia with some of the very best artists in the world.

Although Mark Haskins was born in Cape Town, South Africa, he spent the better part of thirty years studying and performing abroad. As a result of this, he is better received in Europe, America and Japan than in his own country.

Haskins and his hand-picked touring band consisting of Richard Sprice (piano/keyboards from London) Gregory Pierce (bass from Washington DC) and Sergio Petrulski (drums from Russia) did a six concert promotional tour of Italy in February. “African Heartbeat” along with “Nightride” and “The Echoes of your Heartbeat” had the fans screaming for an encore in both Lombardia and Lazio.

As a result of the successful tour of Italy, and a demand from his Japanese fans, Mark and his touring band, will be doing a string of concerts in Japan in November 2018. They will be performing mainly in the Kantō region. It is a geographical area of Honshu, the largest island of Japan. The region includes the Greater Tokyo Area and encompasses seven prefectures: Gunma, Tochigi, Ibaraki, Saitama, Tokyo, Chiba, and Kanagawa.

Haskins has been regularly featured on Music Station, a Japanese music television program broadcast as TV Asahi. The program is also colloquially known as M Sute.

Haskins has a huge fan base in Japan and a large percentage of his record sales come from there. Due to his fan base, coupled with the soaring sales of “Nightride” and “African Heartbeat” in Japan, MIH Music Publishers will be promoting the tour. For years fans and critics alike have appreciated what Mark Haskins brings to the genre of Jazz. Whether it is his unorthodox compositions in songs like “African Heartbeat” or the more personal tracks he's released recently in honour of his late wife such as “Nightride” and “The Echoes of Your Heartbeat”, all his music carries his distinct trademark. One of Mark’s favourite quotes is; “Music is Happiness”. He then always adds this line to it: “therefore it requires perfection”.

The single, “African Heartbeat" released by Mark Haskins in February of 2018 is an unorthodox composition. The varying rhythmic patterns and pulsating bass lines capture the very essence of Africa. This composition has no verses or choruses. It has a pulsating bass line and almost savage drum patterns that underpin everything else. The Rhythmic variations lay down a solid foundation for the guitar lines.

Some 37 years ago, Haskins sat down at an old Chopin upright piano and laid down the bass line of the song. For many years that bass line reverberated in his mind. Mark was frequently changing the drum patterns for this song. In the space of 37 years, he has changed it 65 times. The rest of the song was done over a twenty year span as Mark was never quite satisfied with it. In the meantime he went on to record various other songs while “African Heartbeat” stayed on the back burner. After a 15 year break from the song, Mark finally sat down at a Fender Rhodes Electric Piano late one afternoon. This is where the missing ingredients fell into place and the magic finally happened. This is where it all came together. This was where the true identity took shape. This was where the song got its distinctive sound.

“African Heartbeat” finally comes alive with Mark's faultless guitar work. Those long, smooth, accurate and blisteringly fast melodic lines sew everything up into one neat bundle of pure listening pleasure. Mark was an avid student of Pat Martino for many years and this is very evident in this song as he takes true and total command of his instrument. Haskins has succeeded in establishing his own unique trademark sound. This is something that very few artists achieve in their lifetime.

Haskins plays all the instruments himself on this single. It’s a true labour of love. When asked in an interview by an Italian reporter why it took him so long to finally record the song, Mark answered him like this; “all the years of being away from my country, my home, my people, this incomplete song, African Heartbeat, kept me going. It set my focus, sharpened my resolve and gave me hope that one day, I will return home and complete it, in the country where my heart first started beating, Africa. I suppose it was my sub-conscious making me aware of my roots”.

The band he will be using on this tour will be the same as on the Italian tour except for the inclusion of a 3 piece horn section consisting of: Leonardo Piacino (alto/tenor sax Italy). Klaus van Zuitter (trumpet Germany). Mervyn L Snow (trombone NYC).