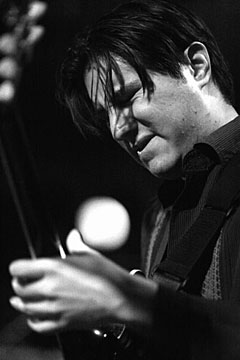 “There are many other guitarists out there pushing towards a modern ideal, but none with the precise coordinates that Mike Moreno has charted." - Nate Chinen, JazzTimes

“A Guitarist of commanding technique and almost architectural expression." - The Village Voice

“A really talented guy who impressed me beyond the notes, for his general feeling, and what he's going for." - Pat Metheny, JazzTimes

“He's so incredibly lyrical, and he's always reaching for something." “I told him I transcribed some of his stuff" - Mike Stern, JazzTimes

On October 8, Mike Moreno's birthday, the guitarist/composer will be hosting a Birthday Bash at NYC's Blue Note, with a performance of music from his debut CD, Between The Lines, featuring Kendrick Scott, Marcus Strickland, Aaron Parks and Doug Weiss!

Mike Moreno has established himself on the scene in a big way, touring as a guitarist for headlining bands including the Joshua Redman Elastic Band, The Nicholas Payton Quartet, Lizz Wright, The Greg Osby 4, and The Jeff Tain Watts Quintet. All the while contributing enormously to the success of recordings by artists such as Marcus Strickland, Jimmy Greene, Q-Tip, Yosvany Terry, Eldar, Robert Glasper, Jeremy Pelt, John Ellis, The Kendrick Scott “Oracle", Myron Walden and others.

Between The Lines is the much anticipated debut release from Moreno, without a doubt one New York's most prominent and versatile guitarists. It is a recording of eight original compositions, which presents an exciting palette of harmonies and sound textures that his band has been developing since 2000. A palette that includes sounds of both acoustic and electric guitars, and the finest of New York's jazz scene, including saxophone sensations John Ellis and Marcus Strickland, pianist Aaron Parks (Terence Blanchard), Doug Weiss of the Al Foster Group on bass, and drummers Kendrick Scott (Blanchard, John Scofield) and Tyshawn Sorey (Steve Coleman, Dave Douglas).

World Culture Music is an artist collective record label and multi-faceted music company that was created by Kendrick Scott to form an alliance of like-minded musicians who are making a significant impact on both today's jazz scene and on music in general.

WCM's mission is to blur the labels in music, cross the cultural divides, bypass the corporate structure and provide the next generation of talent an outlet to fulfill their creative visions. As an alternative approach to the traditional record label, World Culture Music's objective is to bring the artist closer to the listener with no filters in creativity and honesty. WCM provides young creative musicians an opportunity to maintain all artistic control over their music and enables the musician to decide how it will be presented to the world. Unified under WCM, its artists can connect with their audience on a broad scale.

WCM presents artists of the highest caliber who are some of today's most in-demand musicians. Drummer Kendrick Scott, vocalist/composer Julie Hardy, trombonist Nick Vayenas, and guitarist Mike Moreno have established themselves as some of the leading musical figures of their generation. They have played on over 35 recordings combined and performed with some of today's top jazz acts including Joshua Redman, Terence Blanchard, John Scofield, Nicholas Payton, Greg Osby, David Sanborn, Joe Sample, Dianne Reeves Jeff “Tain" Watts, Michael Buble, Kenny Garrett, and Ravi Coltrane.