SOURCE: ALL ABOUT JAZZ PUBLICITY
June 2, 2009
Sign in to view read count 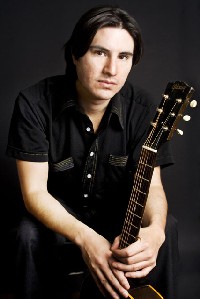 slideshow
A native of Houston Texas, Mike Moreno has been making waves. The guitarist first paid his dues playing gigs around New York, and has since been able to perform with some of the biggest names in jazz, including the Joshua Redman Elastic Band, Lizz Wright, Nicholas Payton, Greg Osby and Wynton Marsalis and the Jazz at Lincoln Center Orchestra.

Though he spends a lot of his time playing and touring as a sideman, Moreno leads his own band and has recorded two albums under his own name, Between the Lines (World Culture Music, 2007) and Third Wish (Criss Cross, 2008), which have received strong praise from fans and critics alike. Fresh from a series of gigs in Europe, Moreno is hitting his stride as he prepares to head into the studio later this year to record his third album.

AAJ contributor Matthew Warnock spoke with Moreno about the challenges of recording an entire album in six hours, using the studio to shape a sound that's different from live performance and much more.

Check out Mike Moreno: Focusing on the Music at AAJ today!