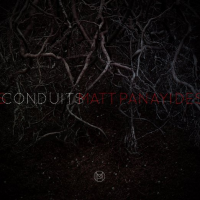 Conduits is guitarist Matt Panayides' second album as a leader. The album (on the Pacific Coast Jazz label) was recorded live at Bunker Studios in June of 2013 with saxophonist Rich Perry, bassist Thomson Kneeland and drummer Mark Ferber. The album was funded through the successful completion of a Kickstarter campaign. The album features original compositions by Matt Panayides who has been busy leading groups both in New York and around the world for the past 15 years.

The compositions seek to demonstrate the freedom and present-ness that can be found in deep musical structures. The music also reflects the underlying order that can be found in even the most complex appearing natural objects. The musicians are given space to let their individuality shine through while also playing energetically with a sympathetic group dynamic navigating intricate passages with a relaxed, fluid feel. Great sounding album featuring top NYC musicians.

Matt Panayides is a modern guitarist/composer. He loves performing and joining forces with a diverse array of musicians, while being part of the vibrant, creative music scene of New York. His compelling melodies, compositions and improvisations remain in the listener's mind long after the gig, employing modern harmonies, free and structured improvisations, mixed-meter rhythms and straight-ahead swing.

Hailing from the Midwest, he moved to NYC in the late 90's to study jazz at MSM. While there he began leading his own groups and playing with other musicians on the scene. In 2002 he moved to Seoul, following performance opportunities abroad. Since his return to NYC in 2006 he has been leading his own group and appearing as a sideman in world class venues throughout the city including Smalls, Cornelia Street Café, Bar Next Door, 55 Bar and ShapeShifter Lab to name but a few.

His current group features a long-standing partnership with Rich Perry on tenor sax and a rotating cast of some of NYC's heaviest rhythm section players including: Steve LaSpina, Thomson Kneeland, Bob Sabin, Sam Trapchak, Dan Weiss, Mark Ferber, Clarence Penn, Jeff Davis and Christian Coleman. He has also begun to appear on the international jazz festival scene with a recent performance at the Daegu Jazz Festival in South Korea, with more appearances in the works.

Some of the other major performing artists Panayides has had the opportunity to play and study with include: Garry Dial, Mulgrew Miller, Jane Monheit, Vincent Herring, Rodney Jones, Mario Escalera, Alec Haavik, Cecil Bridgewater, Gene Bertoncini and Jack Wilkens. In 2011 Matt released to great acclaim his first album as a leader on the Pacific Coast Jazz record label. The album features his tunes with Rich Perry, Steve LaSpina and Dan Weiss. In 2008 Matt finished his MA in Jazz Studies at WPUNJ and graduated from MSM with a BM in guitar performance in 2000. Matt currently splits his time between performing and teaching.