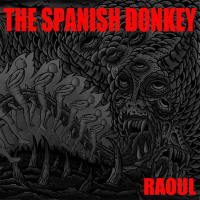 slideshow
The sound of Joe Morris’ electric guitar, with distortion pedal set on stun and wah-wah pedal fully engaged, colliding with Jamie Saft’s droning, microtonal organ and Mike Pride’s thunderous free drumming approach to the kit creates a mind-numbing maelstrom on The Spanish Donkey's RAOUL, the improvising trio’s debut on RareNoiseRecords. A follow-up to XYX, their 2011 album, which was released on Northern Spy Records. The album consists of three throbbing tracks — the brutal 32-minute title track ‘Raoul, the 22-minute “Behavioral Sink” and 16-minute Echoplex piano feature “Dragon Fly Jones” — that showcase The Spanish Donkey's remarkable group-think as well as the individual player’s uncanny intuition on their respective instruments. More intensely cathartic, startlingly original and compelling than anything you’ve ever heard — imagine a mash-up of John Coltrane’s Interstellar Space and Lou Reed’s Metal Machine Music — RAOUL stands as a hellacious manifesto by one of the most formidable improvising trios around today.

“We’re not trying to sound like anything that anyone expects,” says Morris. “We’re trying to come up with something that surprises us and fulfills the musical expectation that we have for ourselves. So in that whole realm of big loud screaming guitar, what we do sounds unique.”

“To me, The Spanish Donkey is deeply rooted in the blues,” says Saft. “In terms of my concept for going into the studio for this record, it really was this idea of creating a monolithic, microtonal blues vibe and having Joe react to that. Joe is one of the few musicians that can really work within a deep microtonal environment. He is on such a high level with his intuitive approach to microtones and improvising within that space, creating in that ‘glacial time feel,’ as he puts it. And so this record essentially is us applying that microtonal blues thing to our free improvising path, and trusting that path completely.”

Drummer Pride, who has collaborated with saxophonist-composer Anthony Braxton, Millions of Dead Cops and the Boredoms, is the perfect complement to Morris’ caustic intensity and Saft’s microtonal explorations on RAOUL. “For me, Mike also has a freedom and a level of trust in the path that is unique,” says Saft. “He is able to shape these larger form compositions while still staying deeply involved in the micro levels of rhythmic division and harmonic color. In the smaller trio format with these particular improvisers it’s much easier to create something that’s loud and brutal while keeping the intensity going throughout an entire 32-minute tune. There are not many musicians in this world that can keep that intensity of focus for that long. Mike is certainly one of them and Joe is a master at that. It’s something that you only find in a really rarefied group of musicians. So I feel incredibly fortunate to play with musicians like that.”

Morris describes his modus operandi on RAOUL: “In The Spanish Donkey, I blend a lot of different effects together and actually improvise with effects. I don’t usually set effects like a rock guitarist; I improvise with a whole sonic palette. So I am constantly switching effects on and off, whether it’s delay, fuzz, ring modulator or whatever. There are a lot of different things going on but it’s a very narrow range that we’re working in, in terms of time and harmony. It’s trying to do a lot with very little. It’s about making a very intense thing happen with a slow time feel and a very tight tonal range.“

As a guitarist, Morris, who turns 60 this year, is a legend within free jazz or new music circles, having released over 40 records as a leader since 1983 and appearing as a sideman on another 50 or so albums. He has previous collaborated with keyboardist Saft on the RareNoise Records Plymouth, Red Hill and Slobber Pup’s Black Aces. Morris describes his approach to playing the guitar over the past three decades of recordings. “I try to be as legitimate and sincere and as thorough and outrageous as I can with every one of them. And sometimes being outrageous means that you don’t do things that are flashy or what anybody else expects. I’d say that’s all I’ve ever tried to do on guitar. I never wanted to be a fusion guitarist or a jazz guitarist or country guitarist or heavy metal guitarist. Every time I pick up the thing, I’m trying to be myself, no matter what the situation is. And that means I have to follow very closely to what my knowledge is of everything and to try to always be completely sincere in the way that I deal with everything.”

Says Saft, “Joe is able to deal with the fluidity of time, pitch, harmony, tonality, tone color in a way that very few guitarists I’ve ever heard can do. It’s something really special. And so, for me, to put that in a blues context with this sort of strong tone center that we focus on for each tune and build around, and then apply all those same ideas of the micro levels of pitch, tone, rhythm to putting together our tracks, this is something unique and seldom heard. That’s really the approach to the composition, in my mind. And there’s nothing that really needs to be spoken between us, because when you play with people like Joe Morris, you’re playing with a master. I don’t need to say anything to him. He can react immediately to all these little shadings in a way that few other musicians can.”

From track to track, Morris, Saft and Pride defy all expectations with their balance between complete abandon and refined control on RAOUL. “I’m trying to make what I think is unique music, and that’s not easy,” says Morris. “You have to work really hard and sometimes you have to make decisions that draw people in in a new way rather than play to what they expect. Some people might listen to this record and say, ‘You’re just playing to the energy and it’s out of control.’ But it’s a really delicate process, almost like sculpting marble, to get that kind of intensity there. And I think that’s one of the things that Spanish Donkey does really well is that we can hold to this very, very tight precision and keep it there. And to go there and keep it there requires a tremendous precision and, above all, listening.”

“The world doesn’t need more free-wanking records,” adds Saft. “And I think this record is actually the furthest thing from that in that it’s a very carefully crafted monolith, large form improvisation based in the microtonal blues world. You have to be open to finding something new, and you hear that search in this record. Joe is redefining what the blues guitar could even conceive of being on this record. It’s not just something that you see and you grab and you put on the tape, it’s something that you’re constantly looking for. To borrow Joe Morris' term, it’s the 'perpetual frontier'.”

The Spanish Donkey explores that sonic frontier with an uncanny balance between abandon and precision on RAOUL, their RareNoise debut.