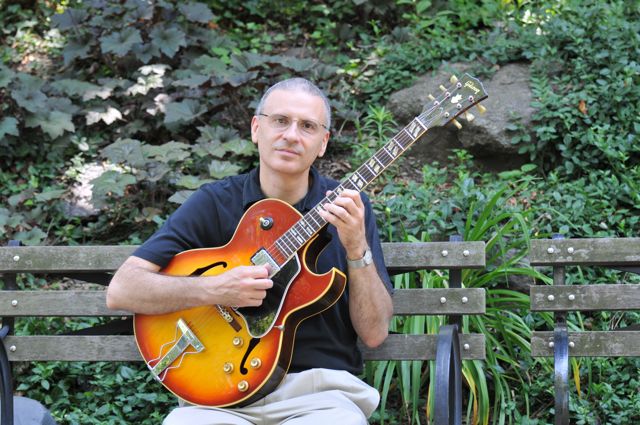 All Things Familiar is guitarist Dan Adler’s first CD as a leader. Born and raised in Israel, Dan Adler studied music and composition privately while learning the craft of Jazz by playing with some of Israel’s best known musicians while he was still a teenager.

For this recording, Dan Adler has assembled a group of top-notch New York musicians. Grant Stewart, widely recognized to be one of the freshest tenor saxophone voices in the mainstream jazz world. Richard Samuels on piano, Dmitri Kolesnik on Bass and Phil Stewart on drums form a cohesive and imaginative rhythm section. All great soloists and recording artists in their own right, their interaction on this recording is magical.

“Dan Adler may not be as well known as some, but his extraordinary playing on this new CD is sure to change that. Besides Dan’s glittering tone and precision, there are some wonderful solos and great rapport and interplay with the other members of this top-notch group: Grant Stewart, Richard Samuels, Dmitri Kolesnik and Phil Stewart.

The four standards are all well known, and Dan’s arrangements treat them with high regard. The six originals are very inventive, and the title track is a clever take on “All The Things You Are”. Dan Adler shows off his considerable technique with much taste and professionalism. I highly recommend this CD. Well done, Dan and company!" --Jack Wilkins

“I love Dan Adler’s new CD. He has such a nice sound combined with a precise time feel and killer lines. It’s all there, all the right stuff. I like the little twists in the arrangements, like the odd chords floating around on “Star Eyes” and the time modulations on “You’d Be So Nice To Come Home To”. Super Cool! I also love the catchy originals, especially the title track. And Grant Stewart’s playing is so beautiful – a real classic improviser. There is a lot of great music and great playing on this CD by all involved. My hat’s off to Dan and the group." --Peter Sprague

“I enjoyed Dan Adler’s new CD. Great playing by Dan and the group. I really love listening to Grant Stewart’s playing. He has that full bodied authentic “Newk” approach to his playing. He knows it’s all in the sound and Time." --Jerry Bergonzi

“Dan Adler has found a role in protecting the legacy of the jazz guitar… He has a clean sound, Metheney-esque, with the long lines and quick turns of his acknowledged influences, Pat Martino and Joe Pass." --Steve Armour