A blessing in these times of trouble and fear: that music should express 'peace and love' without sounding mawkish is probably the best way to rise above all that. --Michel Contat 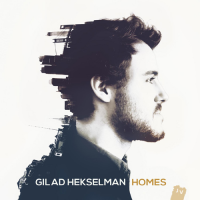 The Gilad Hekselman Trio's new recording, Homes, fills you with quiet enthusiasm. You listen to it – or rather experience it as a contemplative contrast to the artist’s complex identity in a globalized world: identification with his origins, the variety of places he has lived and worked, his musical models and influences, his place among family and friends, and his place within the history of his art. This recording reflects Gilad's relationships with his many homes; physical, geographic, musical and spiritual.

With this opus 5 (on JazzVillage, distributed by Harmonia Mundi) the six-string prince is celebrating a dozen years since his arrival in New York City, and also a decade of making music with his bandmates, double-bassist Joe Martin, and drummer Marcus Gilmore. The triumvirate is featured on Gilad's Words Unspoken, Hearts Wide Open and This Just In. On these essential recordings, and now with Homes, one could find abundant evidence that these formidable musicians form the ideal trio.

Homes is a true suite in musical terms: the prelude is repeated in the finale and the twelve tracks pass through a number of diverse moods. The dominant feeling is one of great tenderness. That is no doubt the keyword for this CD – and there is a story behind it.

In 17th century Paris, the first feminist writers invented an imaginary “geography of love" map. On their wonderful “Carte du Tendre" (the Tenderness Map, a huge publishing success at the time), the heart and body were depicted as countries, emotions as rivers, various stages of love were cities, and passion, a wild sea. In the same way Homesis the intimate mapping of a young musician on the threshold of a musical zenith, who loves life and love as much as the music and instrument he plays—you feel that all of this mingles easily within this artist.

One piece, “Verona", is actually dedicated to the city of Romeo and Juliet near Venice and the mythical “home" of all lovers. Full of contrast, this piece really develops like a love affair, alternating gentleness with exaltation. It is also a fine example of the impressive cohesion of a trio establishing itself as one of the very best in jazz today.

Virtuoso Joe Martin, with his powerful, woody sound, was the pillar of the Mingus Big Band (a supreme honor he fully deserved), prior to revealing his talent as a composer on the album, “Not by Chance”, recorded with Brad Mehldau, Chris Potter and Marcus Gilmore. In addition to his essential participation in this trio, he also holds the bass chair in Anat Cohen's Quartet, Mark Turner's Quartet, and is simply one of the most sought-after bassists on the NYC scene.

Marcus Gilmore is the grandson and fortunate heir of Roy Haynes, one of the last of the great historic jazz drummers - still active at 90 years of age. In both men can be found the same miraculously magical balance between cymbals and skins, as well as the same ability to shape and color music that can conjur gasps and other communiqué of delight from audiences.

But if we really want to find models for Gilad Hekselman’s trio, we look at those of Ahmad Jamal, Bill Evans or Keith Jarrett whom Gilad listened to so much. Over the years, the fusional human and musical relationship they developed and the exceptional interplay they achieved, are precisely what make the biblically accented lament, “Eyes to See”, so marvelous.

GILAD HEKSELMAN AND THE MUSIC ON HOMES

In New York jazz clubs or anywhere else in the world, bebop, three-quarters of a century after it was invented in Manhattan, remains the trial by fire for young jazz players. It’s a sport: get it wrong and you risk losing face. Just listen to Bud Powell's “Parisian Thoroughfare", because when it comes to bebop, Gilad Hekselman and his friends are serious customers, as Parisian jazz-speak has it. Gilad’s trio provides a joyously exhilarating version of this piece. You can just imagine the exchange of knowing glances between them: besides the fact Gilad says that Paris is one of his favorite cities, this track is a pinnacle of controlled speed and a high point on the album.

There are other very different tracks which reveal a more “psychedelic" side to Gilad’s playing; Jimi Hendrix inevitably comes to mind listening to “Space" and “Cosmic Patience", together a sort of day-dreamy waltz of the cosmos, deceptively slow and quiet and which wildly take off at the end.

To those who have compared him, often wrongly, to Pat Metheny, Gilad Hekselman has a fine retort; his spare and graceful “Last Train Home" (a duo with special guest Jeff Ballard) is without a doubt the best performance as yet recorded.

Gilad Hekselman’s guitar style is extremely varied, reflecting his career. We can hear him “naked", ideally sober, in “Home E Minor", a solo worthy of the classical guitar greats. This also reminds us that, for a musician, a key (in this case E minor) can in itself be a “home".

Among his musical “Homes", there is Africa. It is there in the title “KeeDee", which is the central drum used by people from southern Ghana and Togo. Like the three musketeers who were really four, Jeff Ballard comes in to wind up the trio on “KeeDee", and it ends in fireworks. Brad Mehldau’s drummer (and before that drummer with Ray Charles then with Metheny) has enormous fun with Marcus Gilmore.

Brazil is there too, mixing in more discreetly. With impressive counterpoint artistry, the trio surpasses itself in an overwhelming performance of a bossa nova masterpiece, “Samba em Preludio": magical music by Baden Powell to a poem by the “Rimbaud of Rio", Vinicius de Moraes. Nobody has ever sung better of love at a distance.

Here we are, back again at the heart of the “Tenderness Map", the geography of love which definitely seems to be the theme of this CD: a universal love as expressed in the sublime “Dove Song" dedicated to the emblematic dove of peace.

Pertinently pointing out what in Gilad’s music is new and interesting, critic and philosopher Michel Contat sees in it, a blessing in these times of trouble and fear: that music should express “peace and love” without sounding mawkish is probably the best way to rise above all that.